shower tonight- clean hair pictures. I love how fluffy they get after a shower :)

Hello my loves....it's been FOREVER since I've posted in here...in fact, it's been forever since I've done a real post on LJ! I've just been super busy since I started my teeny weensy business (http://www.smearedlipstickthreads.com). I've missed all of you terribly! But I wanted to post my "Dreads are Love" pictures and whore it up for you on my cam. Only because it's been ages since I have....so without further ado...

Wow. All the dreads are love pictures are beautiful, no lie. Keep 'em coming all day.

As for the new community background, I've been busy but I SWEAR I'm working on it. I wouldn't lie to you guys.

i gave birth to my dreadies for good today. [well and last night]. and happy valintines day : ] 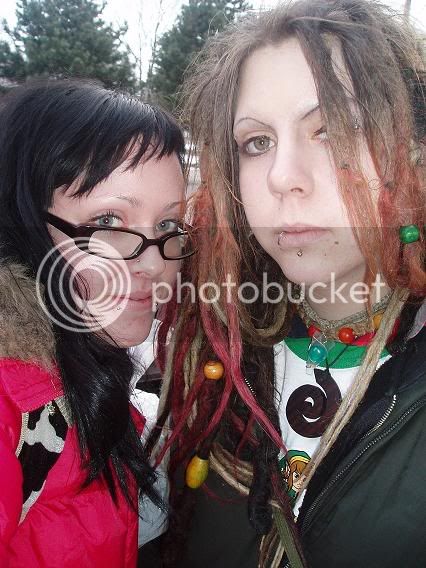 so... I approached the dreadhead in my natural resources and environmental quality class today. He's really rad, and as soon as I mentioned that I'd be dreading up soon, no only did he offer the use of his combs, wax, and elastics, but he also volunteered to help me put them in.

Needless to say, this totally made me smile, especially after the response I got in my university's community when I posted looking for someone to help me dread my hair.

My dad gets married Saturday, I hope to be dreaded by Thursday at the latest. I'm excited.

(Edit: I should proofread before posting. I definitely mean the Thursday afterwards. my bad!)

Happy Valentines Day everyone!! Just thought i'd share a few pics for the dreads are love theme :) I adore my dreads, and i love looking at everyone's pictures on get up dread up. I haven't posted for quite a while, so here I am hehe...

Hi, so I decided to try to start before I leave for Paris, instead of when I got back. I couldn't wait any longer. Although, I think I'm having problems. They're 2 days old now. But I tried to take some of the bands off my roots to see what they'd do and they aren't staying together at the roots very well. Is this normal? I know the whole process is going to take a looong time but I've seen pics of new dreads and they seem to be good at the roots. Should I try to backcomb them better? I don't know. Help?
Oh and I didn't use any wax or anything. I'm trying to avoid the wax. But I'm thinking maybe salt water in a spritzer will do some good?
( Collapse )

my first set of dreads (1996-2001) were "natural" - meaning i didn't do much of anything to them except separate them at the roots & sew in some loose hairs when necessary. & they didn't start to look good for about eight months, & even then they didn't completely look like proper dreadlocks until they'd grown long enough that i was able to cut off all the parts that hadn't originated at my scalp. & for at least six months, i had to be super careful with them in the shower so they wouldn't fall apart - it was another six months before i could wash them as vigorously as i washed brushable hair.

this time around, i backcombed the fuck out of my hair. they looked like decent dreads from about week two, & they're getting better looking all the time. i can wash them normally & they don't slide apart. & though i believe the backcombed parts won't ever lock up PROPERLY, not like the parts that grow right from your scalp, i think it's worth it to save eight months of bandannas & overly cautious washings & impatience.

the point is that there isn't a difference between "natural" dreads & dreads made any other way - because until they grow out as locks from your scalp, they're not going to really BE dreads anyhow. they'll just be knots that formed either on their own or by your hand. so i don't really get why

femminology_ felt she had to cut hers off & restart - all the time her hair is growing long enough to lock on its own, it could have BEEN locking on its own within the UNnaturally STARTED locks, which then makes them perfectly natural.

i'm not judging anybody, & especially not femminology_. as much of an instigator as i am, there's no drama in this post. if you want to grow your locks completely on their own without helping them, do it. if you want to start over for whatever reason, do it. & if you want to give in to impatience & backcomb them so they look decent right away, do that. but the whole natural/unnatural argument annoys me because in due time it's always moot.

Anyone have issues with necklaces and clasps pulling hair out at the nape? My lovely jewelry is going to waste.

Here is the fifth community rule:

4. NO DRAMA.
This is a community. We are a group of people having a common interest in dreadlocks. We need to remain respectful and polite to all members. Everyone has a different method and different reasons for locking. We aren’t here to argue about the “right way” to form or have dreadlocks. (Been there, done that.) We’re here because we enjoy the fellowship we can find among other dreadheads we can’t always find elsewhere. Childish posts like “OMG I’M LEAVING HERE FOREVER!!!11”, insulting someone’s hair or views and anything else that offends the group at large will not be tolerated.

Once upon a time

get_up_dread_up was a war ground of folks starting drama over how to define the word "dreadlocks". So much so that we had to ban those types of conversations. But since we are all big kids here and we can be mature, here is the deal. You can define dreadlocks/locks/whatever you call them in your own posts. You can talk in comments and start discussions about the topic. You can have intelligent heated debates over terminology. Talk until your eyes bleed. I don't care. But the line gets drawn at personal attacks.

I trust that everyone understands this?

get_up_dread_up should still be a place that's open for discussion. That's what a community is. Please don't make me sorry I did this.

EDIT: A good point was raised so I edited the post and personal attacks will be judged on a case by case basis.

A little over 2 months...their getting so pretty!

hey i've had my dreads for 8 months now and they are coming along fairly well. who would have thought that 3 drunk girls in a park could pull off decent dreads on sumone?

putting all this crazzziines aside-
is anyone in here from the detroit area who has had dreadlocks for over 6 months and would like to trade some maintnence?
(if not detroit, anyone from chicago want to get together? we may be moving there and we are going to have to visit beforhand etc- I need some sewing, crocheting stuff)
Also, you know, happy valentines day :)

valentines day (today!) is my dreads' 18 month birthday! looks like my dreads are my only valentine :( that's okay. i'll bag myself a greek man eventually.
( Collapse )

IT MAY OR MAYN'T

Any dreadheads in Montreal?? I'm thinking of taking a trip there this weekend.... never been to canada.... i might possibly be hitchhiking or catching a random ride. details are sketchy.... wondering if i have anyone out there... possibly a place to crash..
ello dreadie heads,

After my post about tighting dread roots i thought that i would give the moveing the roots clockwise round and round for about 3 min's. i did this to each dread. sadly all i ended up with was masses of lose hairs and the such like and my roots dont feel any tighter at all. would elastic bands help? if not i dont see what else i can do! please help!