haven't posted a picture here in a while.
can't really see my dreads too well but i really like the picture.

more to come as soon as, well, i take some.

My husband and I live in an old folks home. The residents here have a ton of aids hired for all hours of the day- so oftentimes when we're doing our nighttime rounds we'll run into someone. Generally they're so relived to see someone who still has cognitive abilities that they'll just ingage us in conversation for the hell of it.
Tonight as I passed one of the aids who happens to have dreadlocks and who was also on her cell phone she said "Can I ask you a question?"
"Sure." I said, assuming she wanted to ask about building procedure.
"I just got a call from this guy who said he wanted to come and pick me up. I told him I had to be back here by 11am and he promised he'd be able to do that. Only problem is its really icey and snowy out and he sounds like he may have been drinking."
"You're asking me if you should go?" I asked
"Yes"
"I wouldnt."
She smiled and started talking to her friend on the phone again "SEE! This girl says I shouldnt go! ::pauses:: And she has dreads!!!"
I am delighted to hear that my hair was reason alone to trust my judgement.

Its been one of those weeks full of schoolwork and whenever I have alot of schoolwork I end up starting a huge project that I can work on as breaks from schoolwork. This time I decided to make a huuuuuuuge collection of photos documenting the evolution of my dreads. On the 15th of March my dreads will be 1 year and 8 months old. Because I'm a photographer I have alot of pictures so I'm warning you this is honestly the biggest dread-evolution timeline EVER. So I'm warning you - if you don't want to look at 2 billion pictures of the lovely gorgeous me... don't click on the link!

I cannot believe how long my dreads have gotten and how much they've changed in just shy of two years. For a while I thought of getting rid of them but now I'm so so so glad that I didn't. I want to have dreads forever! This is the longest time that I have ever had a hairstyle for.

Anyways... hope you enjoy the pictures! 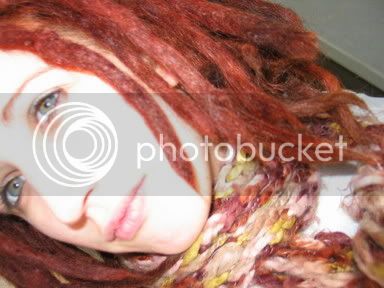 I took these this morning right after I woke up and before I left for work.

tis about that time again, for my recockulous dread(ful) pictures for you lovely lockin' rockin' people. i know i usually share headshots, so i've included two in this batch that are more of me and my silly clothes & muppet-sized self. also, so you can see how long these babies have gotten. e-gads it even shocks me.