So I completed what I neded to be completed. & now I'm ready to show you for real.

Most attractive picture of me, I swear.
( Collapse )
yes yes im naked.

wanna see the full set? then hop over to

so i work in this poopy factory to earn money for school. were talking they hire anyone and i mean anyone. this will be my second week employed there so i don't know everyone yet due to it is so large but i was walking by this lady at work and she said to me; "when i was in jail we use to beat the shit out of white girls that have dreadlocks, they shouldn't have them like you." of course im shy and ran away but later i had to walk by that way and was fed up with everything, tired and grumpy you know. so when i passed her again she was like remember what i said about those girls with dreads. i turned to her and said yea well if i was in prison you'd be my bitch. the look on her face was priceless but im a little sketchy on going to work tomorrow. :) it made me laugh. 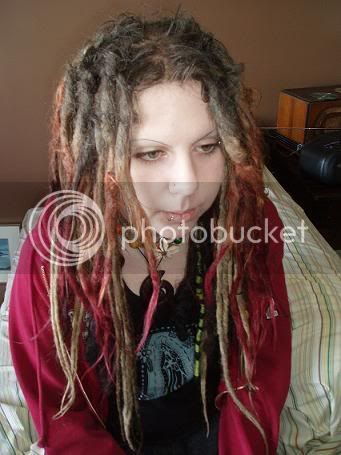 I GOT MY BRACES OFF TODAYYYYYY! MY TEETH LOOK BEAUTIFUL!!!!

and to make it dread related...my babies turned 6months on the 26th.

*edit*i forgot i wanted to mention that the nurse lady at the ortho was asking all kinds of questions about my hair.. are u dreading your hair up? how long? what do you use? that kind of stuff. it was just a nice, no judgment, actaully interested in my hair kind of conversation. made my already great trip better!

I'm having my dreadlocks removed at the Knotty Boy salon in Vancouver, either next week or the week after. I haven't been to Vancouver in two years, has anyone been to this salon or one like it? Do you think that having a professional do it instead of, say, my boyfriend, would yield better results?

Let me clarify the situation a little. I've had my dreads for over two years, and I love them to death, but I'm just at one of those thresholds. Ready to shed all this dead weight and be freed of it. Ready to leave all those heavy, old thoughts behind. You know? It's been a great journey and I would wish it upon everyone if I could, I grew so much and learned so much. But the person I am now, the way I see myself, is without dreads. I want to move on from who I wanted to be and what I believed in when I was 17. I am 100% sure that this is what I want, and I've been waiting for an opportunity to get them out for a long time.

Anyway, all my friends who got rid of their dreadlocks did it on their own with a bunch of conditioner. I know that's possible, but it takes a long damn time and I just have faith that someone trained to do this will be better at it. The cost is not an issue. I just want feedback from anyone who's been to a dreadlock salon or had their dreads removed.

I miss them already. But I'm ready for whatever's coming my way when they're gone.

I haven't posted pictures in quite some time. I don't own a digicam, or a camera at all for that matter, and so I rely on others to provide me with photos.

Anyhow, I went to a party recently, and these were taken:

one of my STUPID friends put gum in my dreads when i was asleep because he thought it would be funny. i didn't have to cut them off (THANK GOD) but i did have to cut them pretty short. STUPID IDIOT.

any ideas on how i shall get revenge on him??....
well since everyone else is doing it i figured i might as well. i don't really have enough pitures to make a timeline but i do have before and after pictures.
before:

im taking out my 4dreadlocks that are on the underside of my hair
ive had them for quite a few months & they are pretty dang tight
but i am getting my hair cut next week & i need them out..

how do i take them out?
Collapse