one year and 2 months
sleeping

I'm Rocky and I'm a new dreadhead ;] I've been dreading them myself after much research and reading from dreadhead.hq. I ordered their supa dupa kit and it seriously kicks ass. Only complaint I might have is the lock peppa goes quick =/ but other than that its been working great. I'm having a little trouble with the dreads in the back, with tightening up but seeing how they are only 4 days old I figure I should stress it too much. Now I'm just palm rolling and loving ever miniute of it.

Now, I went back and read the rubberband memories and I took out a couple and now they seem kind of weak, I figure maybe if you took a look at my hair you could help me out. I'm thinking of leaving em in for another week or so then root rubbing the crap outta them. anywho, enough talk!

A couple before dye job and knotiness: 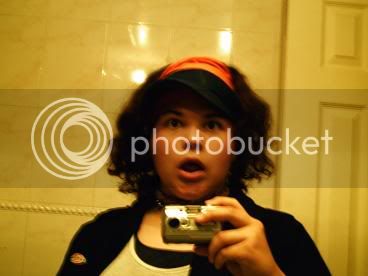 && thats that folks. any input is welcome as long as its helpful ;]

my half-sister, Tuesday asked me to be the bridemaid at her wedding this friday. that afternoon happened to be when i was getting my dreadlocks so i mentioned it when we were discussing the wedding days plans which included getting our hair done. she was upset and tried to sway me to not get them and i didn't lead her on to think that i'd change my mind.

Tuesday called me afer my dread appointment and said she was disappointed that I went through with it. The next day i checked my e-mail and lo:

"I am really disappointed you got dreadlocks! I was hoping you were going to change your mind since you would be in my wedding. To be entirely honest, I'm only going to have one wedding day in my life and I don't want the pictures I'm going to look at for the rest of my life to have you with dreadlocks in them. You are to pretty to mess your hair up like that. Just let me know if you are going to take them out, it's not too late! ...just wait on buying your dress for now. Talk to you soon. Love, me[tuesday]"

i'm not offended or anything. it's her wedding and if she thinks dreadlocks dont look nice that's fine. i wasn't really that attatched to being in the ceremony anyway. Tuesday and I didnt grow up together so we were never really close. its just later when my other half sister called and told me Tuesday was really really upset and crying because of it on the phone, i was very suprised.

i've become very aware of how image obessed my sisters are. Looking beautiful to them is more important then having fun in life. it's such a bizarre thing to me. i'd never exclude someone i love from my wedding just because of what the picture looked like. i'd rather have them involved because it'd be an even funner experience. i'd never be so arrogant to try to determine someones appearance.

we are way different people. they grew up in LA with a very rich and beauty obsessed lawyer (thier mother). i grew up with two older brothers in north california. my favorite activity was trudging through creeks and playing in mud. they did each others make up and did photo shoots. i'm certain the first time they saw any form of nature besides a ski resort was when we went camping. My mom grew up in L.A. She says its the L.A. mentallity: obsession on looks. Even she started falling into it which is suprising since all my life, i count count on one hand the times shes worn make up, or the times she used nail polish.

Tuesday hasn't even seen a picture of them yet. when i talked to her about it, i told her i could get pictures of my hair in a style that'd be appropriate for a formal event so she could see, but she decided not to before i could get them.

she still thinks i'll change my mind. I won't. Everyday i love my dreads more and more. even though you'd think regular would be more flexible concerning hair styles but i've been thinking tons of things to do hat i never would have with regular hair. i've made a bunch of polymer beads for them. it's awesome. i'll have picshas soon.

my dreadlocks cost me $70 to get them done, but they have saved me a lot of money I'd have spent on the dress, shoes, gifts, and the train/plane tickets and hotel. i think i'll spend the money on a trip to disneyland for my 18th birthday.


UPDATE: pictures
a week before my dreads:

so i try to wash my hair about once a week, more if i go to a concert or something where i get all sweaty. but usually i just try to wash it like it was normal hair, stick it under the shower, scrub my scalp and rinse.
and i have alot of loose hairs, as im sure you noticed. they dont bother me really but sometimes i wonder where they come from.
then i thought, well, maybe its cause of the water pounding on my head. so today i tried mixing this awesome berry smoothie scented shampoo in a big cup of water and pouring it over my head and rinsing with the cup too. lots of suds and my head feels nice and light and clean.
and i just thought id post some clean dreadie pictures cause i lalalove my dreads and love you guys :P

okay, so i'm starting my dreads in two days, and i'm a bit neurotic... mostly i'm just very very paranoid about screwing things up.
i realize that dreadlocks will usually turn out looking good no matter what, but humor me on this?

i've looked through the memories a bunch, and there are scattered comments about things that can harm dreads, or just things that most people think really isn't a good idea... but i think it'd be awesome to have one big list of Things NOT To Do.
so basically comment with things you've learned from experience, or other people, or whatever. some of these are a matter of personal preference (for example, use of wax), but you can comment anyway with what you prefer and why, and your experiences.

So...as you may or may not know, our wonderful MOD Jaki was looking for some help in the community, and she most kindly appointed me as one of the new co-mods.

I thought I'd make a little introduction because I'll be honest, I have been more of a lurker lately - so any new members probably don't know who I am at all.

so this may sound gross
but i want some advice on this
which is a better method for someone who sweats in their head piece alot?
A. wash everyday
B. wash infrequently and let the hair get used to the juice

so let me know
pickles
b

Hey people... remember me? Well I am finally back from my trip to the Middle East and I just wanted to say that I'm looking forward to catching up on all your entries. The trip was better than I expected, and I took many pictures, but my camera was confiscated at the airport in France when the airport employee saw a stamp from Pakistan on my passport (we visited Iraq and Pakistan). He took it away from me and I don't know what ever happened to it. But I do have to say that Karachi, Pakistan, is one of THE most beautiful places I have ever visited. It's right on the Arabian Sea and it's just absolutely breathtaking.

SO... I came to understand a bit more why my uncle strongly suggested I cut my dreads before my visit. In the countries we visited (I don't know if it's like this in all of the Middle East, so I'm speaking for only 2 countries), personal hygiene and overall appearance for women is their number one priority. Women must never have dirt under their nails, dirt on their feet, knots in their hair, make up smeared on their faces... things of that nature. It's a double standard, I know, because some of the men run around with long stringy hair and don't bathe for days. I even had to make an emergency trip to find nail polish remover. I did keep my head covered 90% of the time, but in retrospect, I would NEVER take the chance of letting my dreads show, especially since I am a foreigner and already looked down upon.

As for my current hair situation, I haven't brushed it (but have washed) since I cut my dreads, and I think I'm just going to let it do it's thing :)
Collapse