today at work, i took a smoke break, and was sitting on a bench when a youngish guy came over and asked in broken english to share the seat. i scooted over and as he sat down he said something. not sure what he said, i said, "excuse me?"
"beautiful rasta," he said with a smile, gestering to his hair.
most of the time when the word rasta is directed towards me, esspecailly at the mall, its usually someone being an ass. but this guy looked really sincere.
i thanked him just as sincerly, and we began a slow conversation, due to his very broken english. but we talked about palm rolling and he told me he had "rasta" before but cut them for the army and had i been to india, it is beautiful and he had been to new york, philly and next south america.
cigarettes burning down to the filter, he stood abruptly, told me to have a wonderufl night and walked off into the mall.

it really made my night :) My dreads are a week old as of yesterday, and they just keep getting looser and looser! I finally washed them today, and despite being super gentle the top ones look like they're going to fall out.

The back ones are/were doing well, but even they've loosened up a lot. I've basically been leaving them alone, making sure they don't eat each other and palmrolling very seldomly - I've found doing so actually makes more loose hairs! Am I just being really impatient, or am I doing something "wrong"?

Does anyone know someone in the Central New York area or a good salon around this area that would start my dreads for me? I'm in Syracuse but would be willing to drive to a nearby city (I'm thinking Ithaca might be good for this) in order to see someone who has experience with dreading people's hair.

So, it was my brother's wedding yesterday, and after a bit of consideration with what to do with my hair for it, I went out and bought some dried skeleton leaves from a craft shop, and I thought I might post the result if anyone fancies a peek... 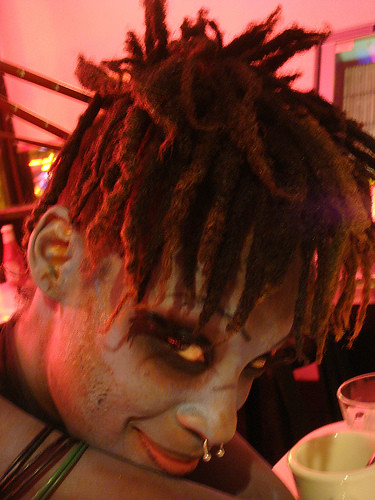