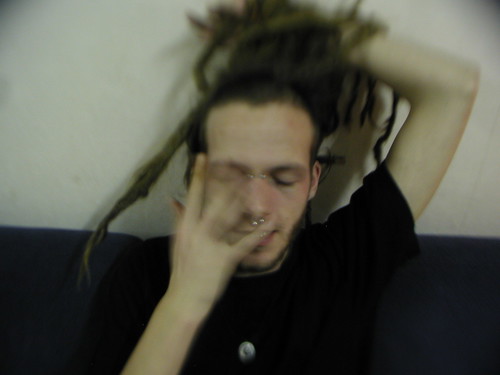 Just a question for the community.
I looked at the memories and this hadn't been discussed yet.
For all of you with dreadlocks that are longer, when did you start to notice growth?

babyrocket but one day cut my hair and while doing that that ripped out all the cute baby dreads that were in it. after a year and a half, i'm back in the game! a couple weeks ago i noticed a knotty clump on the back of my head when i woke up from a bad, tossing-and-turning-filled nights' sleep. i let it go and it's since split up into three cute, moderately tight dreads, while the rest of my hair is sectioning itself off. i'm pretty happy! i thought i'd tell you guys about it since most of my friendslist would just be like "uh, yeah, your hair's knotty. good for you."

i'm going natural, same as last time, and it's working better already with my hair length. so if you're interested, ( Collapse )
Just thought Id post again as  I'm very excited to be doing my mates dreads on Sat.....

He was going to pay for the hairdressers to do it Chemically....but then I saved him from the doom he was about to put upon himself.

We're gonna start with purely a comb, because he has really really curly and long hair, that dreads itself (but messily) after about 3 weeks of not brushing anyway.

I will hopefully be able to document the entire thing and then post the pixs on the monday when I come back from home.

I visited my friends in Martha's Vineyard this week and I got some pictures of my friend Nina's dreads (some of you may know her, if you dont: www.myspace.com/ninaviolet). Theyre 4 years old and theyre the reason I wanted dreads to begin with. Sadly she says she might cut them off this summer because she'll be touring with Willy Mason in a van and it will be hot and a little more of an added pain in the butt to have them. Even so I hope she keeps them because I cant imagine her without them.

hope everyone had a happy new year and best wishes for 2007!

So I went on a mad hunt for shampoo today. I like the Dr. Bronners tea tree oil and I can get it at one of the head shops at the Ithaca commons, which is like an outdoor hippie mall where everything is all natural/organic, made from 100% hemp, and every store sells dread beads and bongs. But thats back at school and Im home on winter break right now. So I went to the head shop in my neighborhood hoping they would sell something. All they had was dreadhead HQ shit, and you had to buy a whole dread making kit. Nothing was sold seperate. Sooooo, I bought it. **lame** Tonight out of shear boredom I read through everything, checked everything out, whatnot. One of my boyfriends house mates has super nice dreads and she uses the DHHQ shit religiously, so I figured, I paid $40 for it, I might as well try some of it. Sooooo, I decided to try the wax in only a few of my dreads, using even less than the directions said to. Buuuuuuut, the methodical motion of slowly waxing my dreads kind of zoned me out, and before I realized it, I had done pretty much my whole head. I cant decide if Im happy about this or not.

Also, my undercut is starting to get long again. I dont plan on ever brushing, but I have very thin, fine hair and it fights hard against being dreaded. Its a lot of work to keep up with for my hair apparently, so I dont know if Ill be able to go natural when the undercut finally starts getting long enough, but I would like to. All my dreads were originally backcombed, but my boyfriend rip twists the lose ones for me and that seems to hold them better. I dont know, I just felt like ranting.

About a month and a half. Theyll be two months on January 16. My second set. A unkosher amount of overwaxing ruined my first set. I think thats why I might be more sketch about waxing this second time around. Hmmm.
Collapse