Weeeellll
I met up with

beyonddreams yesterday for some dread maintainance. I got some (poor) pics. Ill leave it to Sylvie to  post the better ones :P

Quick question, I guess. One of my friends fathers passed away a few days ago and I was very close to him. His calling hours are 5-8 tonight and the funeral is tomorrow morning. Ive never been to either before and I don't really knnow whats appropriate to do with my dreadlocks. They're pretty short so I dont do much with them as it is. 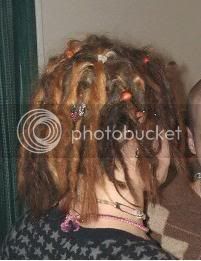 To give some idea of their length.

I don't know. Anything is helpful at this point.

so from like my ears down-the base of my skull-my scalp is really flaky/has a lot of build up. i dont know if it is technically dandruff or not, but im not sure as to what the best method might be to taking care of this?
help, please?
its not really itchy or anything, it is just flaky and pretty thick in some areas.
is this normal and i should just leave it alone?
how can i give my scalp a good clean seeing how it is so hard to get to certain areas?

In a fit of impulse, I chopped most of my hair off. :(
Now I've just got this feeble little dreadlet.

I loved my bihawks for about three days, now I want my mop back.

haha, i made some funny pictures today at school :P ;

it was for a school project,
i had to make pictures that were non-created and created :)
adios amigos ~

hi everyone. im going to be starting my locks tonight and i have a question, when you use dr. bronners liquid soap to wash your hair do dilute it? i checked the memories and i didnt see anything that answers my question. thank you! :)
Ever chew on your dreads?

all pics behind cuts are semi-worksafe: not naughty enough for

gorthok & i both caught the same cold last week, i from my boss, & he from me. joe's illness was exactly seven hours behind my progression of symptoms, which was pretty damned interesting on several levels. anyhow, we were both sick all week, then spent friday & saturday moving his stuff to our apartment. sunday morning, he called out sick from his circus obligations, & i took some photos while he did so.

story two:
so we were fooling around on the sofa, & joe wound up pantsless. this was all well & fine when we decided to go to sleep, but on the way to the bedroom, joe was distracted by the mess he'd made in the kitchen. when he started mindlessly cleaning up, i couldn't help laughing & snapping pictures.

story three:
directly following the kitchenbutt incident, we moved to the bathroom to floss & brush & do other sleep preparation things. (yes, together. yes, we're adorable. shut up.) it was chilly in there, so i put my back against his, then noticed how good we looked in the mirror.

ok, that oughta hold you kids for a while. enjoy.