today felt fluffy beads for our dreadies here you are +)) 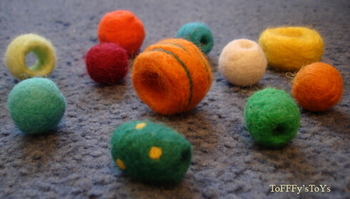 singing along to rocky raccoon...

they'll be two years old in a month. i'm just finishing up my contract as a park naturalist, and i have a few days before we jump in the van for mexico, so i'll try and get a timeline up.

im having a hard time deciding if dreads are right for me. i want them, dont get me wrong, but i have done lots of things to my hair already. i have grown it out, cut it off, gotten an 'A' line cut, dyed it black, purple, red, bleached it, then dyed it red again. it is back to its natural color. i just hope my hair is strong enough to handle dreading. and insight would be very helpful.

I posted a month or two ago about my dreadlocks' lack of forming. I repeatedly tried to backcomb them back every time they came loose, and it was recommended by everyone to give it one more backcomb, with some rip & twist, and leave them be.

Now, at 2.5 months post-backcomb, I have mostly brushable hair. Well, for a while I had some knots forming by the roots and I was pretty excited about it, thinking that *finally* something was happening. But alas, it was just that I was still in the middle of my post-partum shed when I backcombed, and all the hair that shed was getting caught in the backcombing, and sort of knotting. But not really, apparently, because the shed hair is currently coming loose from the dread and falling all over the house, leaving me with almost no knots at all (except after a shower, when I shampoo vigorously and it all mats together). Many of them are completely un-dreaded.

So. I'm feeling like I'm at a crossroads. I can leave them be until they're all fallen out. I guess there's a chance they'll start to form, but if they don't I can just start all over. Or I can comb them out now. I'm thinking I can convince my brother to do a better job of backcombing than I was able to myself.

It's just so depressing. 2.5 months, and now I'm looking at starting all over again. I'm really worried that my hair just isn't going to dread. Does that ever happen? For instance, I didn't dread the hair at the nape of my neck because there wasn't enough for good-sized dreads and I figured they'd get sucked in by a neighboring dread, but the hair there is still smooth and silky and annoyingly untangled. Is there hope? Some inspiring stories wouldn't go amiss here.

Edited to add another pic, where I've tried some of the methods recommended here. I likey.