I just had dreads put in yesterday, and they're all only about 3 inches long... which means that they stick straight up, at all angles. When checking the memories, I read that poofiness can go down in a week or after the first wash or two, but someone also said that their short dreads took 7 months to stop sticking up.

What's your experience been? Will they go down with the help of scarves & washing, or are they really going to stick straight up for the next 6 months? 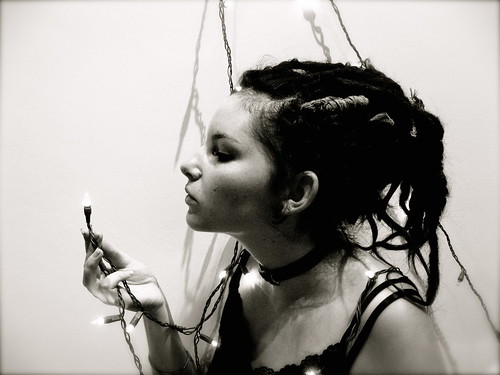 my dreads turn two this month!

I wish I would have found this comm before I dedicated myself to my own version of dread maintenence. If I would have known (or even thought to) just sew or crochet the little loops and strays back into the dread, I would have saved myself the consequences of having just snipped them off.
Now, I read the "loops" memories and didn't see this and was wondering if it happens to anyone else or maybe WHY it happened, but when I was in the habit of cutting the loops rights off of the side of my dread, a few days (sometimes weeks later), the rest of the dreadlock that was BELOW where the loop was, would just pull right out of the rest of it from the bottom, leaving me with a half of a dreadlock. Bah! So, I made some synth ones to "repair" them (make them look the way they did before I botched it). But...anyhow, no more loops but now a bunch of short locks....:(

hey i was just in belgium for a year as an exchange student, and i lived in ghent, which is like the dreadhead capital of the world. so i got really used to seeing dreads on people other than myself.
one of the things i noticed, was that a lot of people would have like, part dread part shaved heads. half shaved heads, or like, random dreads.
idk its kinda hard to explain. i was tryna look for pictures of alternative dread styles, but i couldnt find anything online.

cuz, i've been back in the states for... probably  two months now, and im fianlly starting to miss having crazy styled people around me. so i was going to partially shave the right side of my head. but i wanted to see pictures of people who have successfully made it look good first lol.
i was wondering if anyone knew what i was talking about, and if so, do know where to find pictures?

i'm thinking about taking my dreads out... and i have a few reasons for that;

- the foundation is not so good, they started off very badly by people didn't knew what they were doing.. including me ;)
- the attached dreads look pretty good, but there's a whole lot of trouble with them.  they snap very often and it's just frustrating me.
- im also thinking about taking dreads when my hair is longer, much longer so i can start all over again and do it right.
on the other side they just turned two and are getting better..
and im scared taking them out, im not really sure what to do. help please????

first off, i want to tell you all how beautiful you are! i love this community so so much. i've been watching it for quite some time, and my NEED for dreads continues to increase.
HOWEVER. i am desperately trying to wait until my hair gets a tad bit longer - a few inches, maybe four - to start my first set. i had really short, british boy hair for awhile after cutting off all my wild, long, massive amounts of curly hair. it's now about to my shoulders, and i don't like this length on me so i'm trying to grow it out for as long as i can stand since i know it will shrink up as soon as i start my set.
but it's trying to tell me things! i don't condition or brush my hair ever because it's way too wild and takes too long. from this, my hair has twice formed a little dread in the back ALL BY ITSELF! i'll be trying to pat it down in the back or put it up and VOILA! i discover a new friend! it's really quite nice.

so, i was wondering, have any of you started your dreads with just a few dreads before you added the rest in? (if that makes sense at all.) how long did you have the few before you created the rest? pictures would be great! i currently have a little baby in the back of my head, but i'm considering combing it out and creating another right under my left ear.

I didn't want to post straight after I decided to attempt dreadlocks, I thought I'd leave it a while! At four or five months, I'm certain my pictures will fail to impress! :D

Secretly, I'm looking for any maintenance advice you folks are willing to offer. I have no doubt they will progress particularly slowly because my hair is so fine! The roots are well locked up thanks to relentless clockwise rubbing, but an inch or two down the way, and most of them come completely undone!