Thanks for being the individuals you all are. I love the pictures and reading the posts/comments.

Well, I'm finally (and spontaneously) coming out of the cracks of this community and giving you a post to gander at! I'm Liz, from Statesboro, Georgia. 17 years old, a junior in a high school that she hates, etc etc.
I've been a part of this community for about a year and a half, if not more. I've always wanted dreadlocks, even as a kid. This past July, I finally got them! It's amazing, I know. I wish I could have posted sooner, but I've just recently been reacquainted with my baby, which I lost for about seven months, and was recently found in the breast pocket of my brown leather coat. Safe keeping, right? Well, now that I've found him/her (this camera really needs a name. Any ideas? Its a Canon Powershot if that helps at all.), I'll show you pictures (Though there aren't many of progress.)

So, that's that for now! I can't believe that they'll be five months on December 1st. Sometimes I miss being able to play with and brush my hair, but I'm so happy with my locks as they are now. Many people ask me stupid questions, like if they can brush them. Duhhhno. My aunt, who didn't see them until they were about 4 months old kept saying that she couldn't picture me with dreads, just Bob Marley with my face. :/ Oh well. She also said that she met two black guys with dreads through her job, and the three of them had a conversation about white people having dreads. They couldn't believe it when she told them her white niece had them! I thought that was pretty odd, considering that they live in a big city such as D.C. Oh well.

If anything, I'd love to add some of you dreaded-haired folk to my friends list if you're willing. Cheers, and I hope you enjoyed my intro post!

Thank you to everyone who replied to my post of a couple of days ago. I feel a lot more confident about dreading my hair without needing to use a lot more resources than I currently do. There are many reasons for me wanting to do this, to make this sort of change in appearance and lifestyle and among those reasons is living even more lightly on this earth, i.e. using fewer resources.

So thanks again for reaffirming to me why I can confidently dread my hair.

see, i had a job interview and they want to hire me. pretty badly, actually. but as any of you know who have seen my posts in here and naughty_knotty, my dreads are messy. loopy and lumpy and frizzy as hell. i like them like that, but my employer does not. (also i'll have to move closer prolly, but that's an entirely different post)

so i have a couple options:
1. i can (ugh) start using wax.... which i'd really rather not. (plus it wouldn't do anything about my lumps or loops, just the frizz)
2. i can crochet/felt them... but i'm really not high-maintenance about image (hell, i shower about once every three weeks and shave even less often) so i'm not sure if i'd have the motivation to be anal about the upkeep of crocheting like, once a week or so (how DO some of you do it? really, that would drive me nuts).
3. i can cut them off... (not an option, in my opinion.. but i'm nigh broke and i have rent coming up, so if it comes down to dreads vs. job, i'd take the job...)
4. i can cover them up!
so i think i might need a tam for my new job, and i was wondering if anyone would be interested in making me one...
i could always just go to a store and buy one, but i'd really rather support individual artists if i can. you'll of course be compensated :D
also, i will love you forever.

only in black (because then i don't need to worry about it matching with what i'm wearing! yay. also it'd prolly look more "professional")..
my future boss actually had dreads himself and he said that if he didn't need to send me out to clients, then he couldn't care less. i totally understand where he's coming from; it's unfortunate, but people out there DO judge your ability based upon your appearance.

i went through the memories and i KNOW a lot of you knit. :)

it's an old one (around 8 months ago), but still one of my favourites!
i'd take newer ones, but my camera has no batteries :(

I recently turned 23, and I finally feel like I know who's living in this skin. 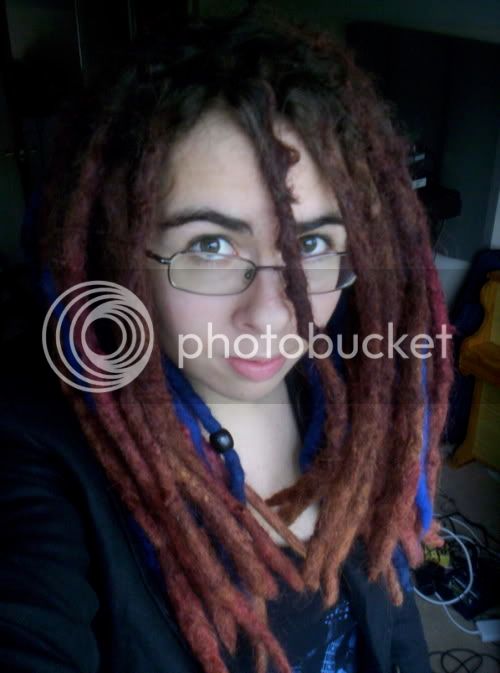 I love headbands. A lot. Especially now that I have dreads...

But  whenever I wear a headband it gives me this horrible headache after a while. Some are worse than others, but I've never been able to find one that didn't do it at all.

I guess behind my ears is a pressure point or something.

I still make myself wear one every once and a while, because I get bored with bandannas and head scarves, and I'm just wondering if anyone has come across something similar to a headband that somehow avoids pressing down behind the ears?

I'm also a little bit curious to see if I'm the only person on earth with this problem. My head is a freak of nature...

I was bored so I figured I'd show you all some of the synth dreads i've been using until my hair is long enough to do real dreads.

Alright if I missed this in the memories, someone just link me or somethin...but i honestly looked everywhere i could think of and I didnt see it, so..

My situation is this. Its been about 2 weeks now since i dreaded my hair. 3 days ago I washed it for the first time. I used DreadHead Shampoo. I decided to use the method of rinsing my shampoo out with large cups of water instead of trusting the showerhead, but I think I failed to get all the soap out. Ever since I washed them i've felt a residue on my hands after I palmroll. Furthermore, since the shower my dreads have been unravelling, despite all the maintenance i've done. Theres no smell to the residue, so i'm almost positive its not leftover wax...especially since I used the wax sparingly and there wasnt any left by the time I washed.

So the big question...do I risk rinsing again to get rid of any residue I might have left behind or do I leave my hair alone, residue and all?

the kid on the right
yes dreads
or no dreads? why?

When your dreads were new (or if they still are) would you sleep with them covered or not?

So, I'm just curious what the consensus is here (if there is one).
Collapse