okay
so
When I started my dreads, or like, in the first few months of starting my dreads, I sewed into the front dreads some thread. I thought it would make it look pretty, I have red and blue and green and yellow....and so on.

But now, several months later, now that the dreads in question have eaten the thread enough so you cant cut it out, the threads just make it look like I have little bits of...stuff in my dreads. Like, not pretty thread...just... some unnameable substance that makes them look kinda dirty. I liked it at first but now I'm mad at them, and I tried cutting the threads out but it really, really doesn't work.

SO QUESTION TIME!!!!!! Those of you experienced with such things, do you think if I bleach my dreads the threads will also bleach??? my hair is naturally dark, so I died my dreads brown about a month and a half ago, hoping the threads would dye the same color and be all secretive. But they didn't, so I am worried that the bleach wont do it either. I'm worried they will stand out even more! Advice?

On another note, those of you with young dreads who think it'll be really cool to sew in different colored threads into your dreads, guess what? its not really that cool later on so be advised :(

mouse_on_marz for some time and finally decided to return here.

It's me and my babies. Something about two years and a half. 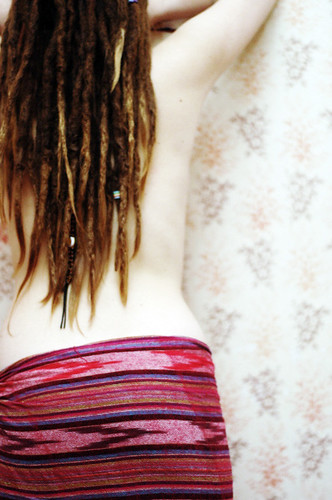 i dyed them dark purple recently pic for my business card... ... i have since stopped with the wax and i am going a more natural way

Being that the scale shows I have lost 15 lbs, I wanna compare...

This is me back in November, holding up my Melody Maker: And this is today, taken in my work bathroom.. sorry, it's fuzzy: Now, granted, I was somewhat shaven in the face back then, but I'm beardy now, so it's hard to judge if my face looks thinner, but I think my gut might be smaller. I still have a long ways to go. I gotta just go by how I feel and stuff. And I feel pretty good.
Well well, I've been missing from GUDU for a while! Sadly I have no access online at home, so I'm missing out on the dreadlove (for now at least!)

7 month dread update, and I have newly nubbed ends, done by folding the wispy ends inside the dread, and held for 1 week with some cheap hairgel.

They dont look so good in these pics, as Ive been doing the cleansing ritual in the memories, they have tightened up so much...and shrunk... its scary! For people wanting to do said deep clean, I say go for it, its great!

portland maine at gritty mcduffs... me and my crew at spiritual rez...
( Collapse )
Collapse