Sort of a lame and not-so-impressive landmark, but i'm bored. =p

I have a question for those of you with longer and denser (is that even a "legal" word??) dreads. Do you do anything to your hair when you go to sleep? If so, then what is it?

The reason I'm asking is that I usually keep my shoulder blade length dreads up in a very loose ponytail, but I don't feel like I'm giving my hair the freedom it wants when I sleep. If I don't put it up, I feel like I'm sleeping on ropes (my dreads are QUITE dense!). And all the pretty stuff that I keep in it for decoration makes for painful discomfort when it ends up under my temples or cheekbones.

Also, if I put my hair up I can't sleep on my back since the bunched up dreads in the ponytail ends up jamming into the back of my head and neck and I wake up with a sore neck :-(

Obviously, I'm not heavily disturbed by any of this because I've had my dreads the way they are for a while, just curious what other people might do! :-)

And here are some recent pictures!

i like laughing till my guts hurt. Then you have something to show for it, you know?
hey.
first off, i want to say that i have extensively read through the memories and entries on gudu, but i'm still looking for advice on a more personal level.
i have straight, thin asian hair but decided to get dreads a little over two months ago. i love them love them love them and i try so hard to be patient with them, but they just don't seem to cooperate or want to dread. true, i started out washing them twice a week which may not have been the best thing i could've done, but i managed to stretch out my washing habits to once every five-six days. on top of that, for the first few weeks when i probably should have kept them more intact with backcombing, i wasn't able to because i didn't have a proper comb. that being said, i went to my friend's house yesterday for some maintenence on them, and we first took the step of washing them since they hadn't been washed in several days and we didn't want to end up undoing any effects that may have happened if we worked on them first. after washing them and even soaking them briefly in rubbing alcohol (...) the majority of them pretty much...came out. yeah, dreads that had been slowly coming apart over a period of two months finally just gave up.
suffice to say, even when they were dreaded, there were constantly several inches of undreaded hair on the ends and loose hair kept slipping out of them.
so in an attempt to fix some of them, my friend did some twisting thing, some backcombing and all that, and rubberbanded the roots and ends.
it seemed like a good idea, but reading all the memories on rubberbanding, many people caution against it and suggest that it's better to let the dreads form on their own.
as much as i want to take that advice, i feel as though my dreads will do nothing but fall apart again and again unless i really force them to knot or keep them together somehow. (p.s. the rubberbanding only applies to some of my dreads. there are a few dreads that are unbanded, and the rest of my hair is just normal and undreaded.)

advice please :( i don't want to give off the impression that these dreads were badly made from the start, because they definitely started out normal and promising. it's just something along the way that i must've done wrong.
and sorry for the long ass entry

ok, which one of you dreadstalkers just accosted my boyfriend in the metro market? the conversation went something like:

her: hey, i recognize you from your gf's livejournal!
him: yeah, she posted some pretty racy photos of me there.
her: yyyessss, she did!

'fess up! it pretty much made his night. :D 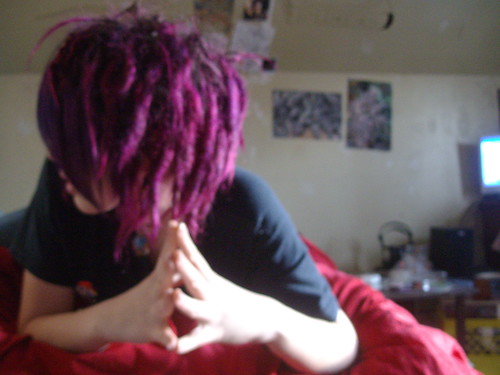 I haven't been around much but thought I would post an update of my dreads. They're very funky and in many areas undreaded. They frustrate me but I know that eventually they'll look good. It'll just take time. I worked on them for the first time in two months today. Oh on occasion I would pull them apart but today I palmrolled the hell out of them. They need it. I'm going to have to do that more often if I want them to look good. I'm also thinking of getting a felting needle.

i was having a talk yesterday with a friend about dread products, and i was wondering what you guys' opinions are.
if you have used both, or from experience, which do you prefer: knotty boy products or dreadhead hq? any stories? please and thank you :)
Collapse