ive got a long way to go hehe

after visiting my rasta friend anthony to buy some hats (he owns a sweeeet hat shop in liverpool!)
I sent him a text to say thanks for the hats/beads and himalayan cream he picked up for me...

then he send me one back, just saying 'jah bless'

i actually love him.

so i bought a rasta stash box and called it anthony...he has shorter dreads and everything :)

I'm looking for dread heads in the S.F. Bay Area to photograph.
I'm not looking for your typical model type.
Body size height/weight doesn't really matter to me.
If any of you are interested, please let me know.
You can respond here or e-mail me

include a picture so I can get inspired
and plan something around your look.
We'll talk and stuff and see what
we can set up!!!!

If you're not in the Bay Area but think you
might be visiting,
please contact me as well.
I'll be here!

My website is currently undergoing a massive re-construction,
but if you want to peek at some of my work,
you can see old stuff on my myspace page:

I swear, I looked through the memories but I didn't see it! So, I put it to all of you: is there a way to tighten dreads that are, well, fuzzy? I've had mine since last September and while the ones on the front and sides of my head are looking full of awesome, the clump of hair in the back refuses to knot up. I've got little dreads and want to keep that throughout my head, but the back refuses to tighten up; it's a mess of hair and it's frankly annoying me. Given that I don't have anybody who can help me out with it and am not especially limber, is there a way to get what sections I do have to tighten quickly? I've heard of salt water helping but I've been using that DreadheadHQ salt spritz stuff and it does jack diddly squat.

It's summer! Time to go blond again. I am way too freaked to bleach my hair, but I managed to find a die that would "cover Black". I didn't have super high hopes for it. But after 2 boxes I'm quite happy with the results. I left five dreads I think the dark brown. I'm planning to die some lighter brown in the future to have a three toned look. what do ya think??

Also... my hair has gotten quite a bit more damaged. Not too bad, but I was wondering if maybe I should do a hot oil treatment or if that would be bad to do too soon after. I use acv but I don't think that that is enough right now.

i thought i'd do an update since i'm dating and living with a photographer... i am well stocked from our adventures. :) they will be 3 years old in september. i recently got a little undercut in an effort to make my head lighter and cooler but it didn't help that much. i also just dyed them burgundy yesterday for a festival called lightning in a bottle that's going to be all circus-y and cabaret. is anyone going? also, is anyone going to the whole earth festival in davis next week?

I`m a livejournal spook, buuuut...
My dreads turned one yesterday!
It was also the last day of my first year of college, so I had friends over for card games, champagne, and cake.
( Collapse )
I noticed someone posted on here about a guy they saw in the street who said something about respect being something or other.
I am assuming I am not the only person here who has received rude comments about dreads, and how I should not have them because "I'm not black" "Im not a Rasta" "Im not part of that culture" blah blah blah.

I learned all of this from Wikipedia, even though I can't actually stand that website.

So for all those who get bu****t thrown at them for not bein' a Rasta, put those fools right.

Also, someone asked me where abouts I was in the midlands, UK.
I'm between Nottingham and Derby, just so you know, sorry I didn't reply.

you know when you haven't seen the back of your head in a while? and then you take a picture and it looks like THIS? 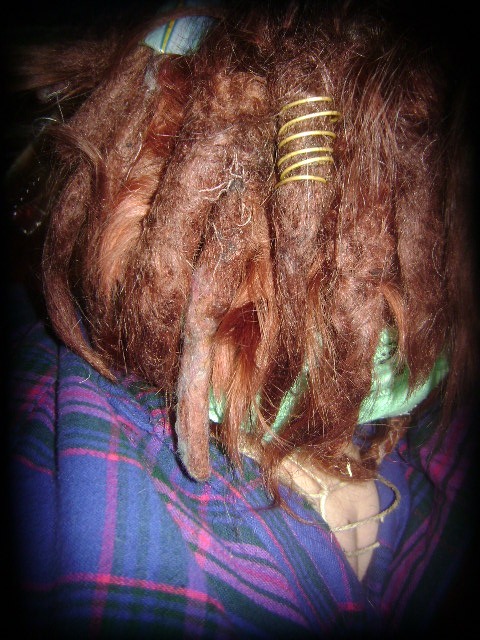 seriously. i think i just peed my pants. soooo fattttt.

( Collapse )
they took on a wierd color in this scan....hmmm.

one of my older songs
( Collapse )

my dreads' 4-month anniversary of post-conceptional existence/my dreads' four month birthday
my recent life:
( Collapse )
its all strange and beautiful
let there be nothing but gratitude in our hearts.

Hi I'm kelsey.
I have a dready question for youz.
[and a picture of my new kittiez :]
( Collapse )

EDIT: I have decided definitely to not do the perm thanks to you guys, and am in the process of dreading my hair. I have 5 dreadies interspersed with my normal hair at this point, and more to come :D