a conversation i had with a girl last week before toronto's marijuana march:

have a good weekend everyone 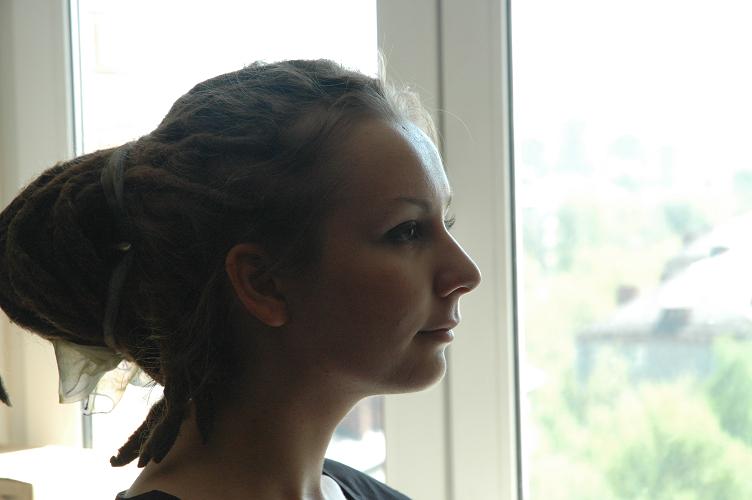 Went to a party last night and there was a boy with really stunning dreads. He ended up coming up to me and asking to feel my dreads, and we talked about his...he used wax, and backcombed really, really tightly. I've done mine all-natural, and haven't really done much to them except some loose backcombing and occasional sectioning. He laughed at that: "Wow, you're a trooper. Good luck with those." It's pretty much the first comment I've gotten besides "Oh god, what did you do to your hair," and "When are they going to look like real dreads?". Cool.

I've researched the memories best as I can, but still have a few hesitations about this situation. I had my dreads put in a few weekends back, and ended up taking them out because of an overabundance of wax making them sticky, and fall apart. I took them out and I want to put them back in, BUT in our job we're getting ready to move into a new building and instead of being alone in the office by myself, I'll be near customers all day - and I know for CERTAIN the messy natural dreading process won't go over too well.

First and foremost, I'd like to just say I'm not trying to skip the process at all. I've done a bit of research and they both undergo quite a few months of not looking really like dreads. I just know that with a dread perm it locks up and looks 'neat' right away.

I know it sounds silly, but I just worry that I'll have regret for not back combing, and maybe feel that my dreads arent as real or as adequate as people who let them lock up on their own. I know I'm probably just babbling, but any kind of input or support would be good. I know what they are, and I know they look curly and strange for a while, but I guess that's all part of THAT process too.

If it weren't for my job I'd LOVE to backcomb again, or even go about it via neglect. Either would be cool for me, but since I work in one of the biggest (and snootiest) car dealerships in all of southwest Florida, that isn't an option. Which really sucks for me.

I guess I'm not so much asking for an answer to any kind of question, except what are your opinions on people who get their dreads done that way... If you have a dreadperm, do you battle with feeling different than those who went about it a more natural method? If you have natural dreads, do you feel differently towards people who have gotten their dreads permed? I know there's a lot of elitism associated with dreads (which for the life of me I can't really figure out) but I suppose I shouldn't let it bug me.

Hey there! Every new year eve we 've got different fancy dresses. Mine was Pippi Longstocking this year, i decided so, cos now my dreadies're fully-grown and sticking out themselves))and because i've got a lot of colourful stockings and i'm crazy about sewing such dresses))) And, of course,i just love Pippi!!!!)))
And maybe it's already been discussed once, But i'm just wonder what is your favourite character and what fancy dresses you've got?>))
I'm just thinking over the next masked ball :Р )))

ohhhhh man i saw a guy on standing santa monica boulevard with the most phenomonal waist length blond dreadies... i wanted to yell out the car, I LOVE YOUR HAIR! but the light changed and off we went... hate it when that happens. but it was perfect timing, because i've been feeling kinda dread-eh lately.. i love my hair as a general thing but lately i've been itching for a change. thank you, random stranger dreadman sighting, for reminding me that i need patience, gotta just stick it out... maybe it's time for a dye if it's change that i'm seeking.

for those who don't read my lj, i trashed my back last week, & so i'm stuck home still recuperating while

gorthok is out at a friend's birthday party. so, what else is there to do but post some pics i took before being laid out?