A few nights ago I had the second dread related dream I've had thus far.

I dreamt I made a trip to see Lishd...and I saw her face!

Oh, GUDU, must you haunt my dreams?

I washed the 2.5 week old babies with Herbal Essences "degunkify".

Worst idea I've ever had.

OKAY So, I started my boyfriend's dreads today. I have really porous hair and so my single dread formed and tightened so easy and quick, so he trusted me. Probably a bad idea. I can tell he's really anxious and kinda upset about the job I did, but his hair is so silky! I told him to just have patience because he went and looked up stuff and wants to use copious amounts of wax. I explained that that's not natural and I know he wants to be natural.

It's so frustrating. We back combed like crazy (I went over each dread twice for 20 minutes and he has about 20) and he's whiney because he's going off of all drugs. I put loose rubber bands in the ends more for sectioning reasons than anything, and we went to play soccer and they fell out mostly.

I plan on re back combing and adding some aloe on Wednesday, but what else can I do to help out stupid silky hair with dreading?

my friend did a photo shoot and i was the subject;
just this one photo for now, cause its my favorite and im sure you can guess why. 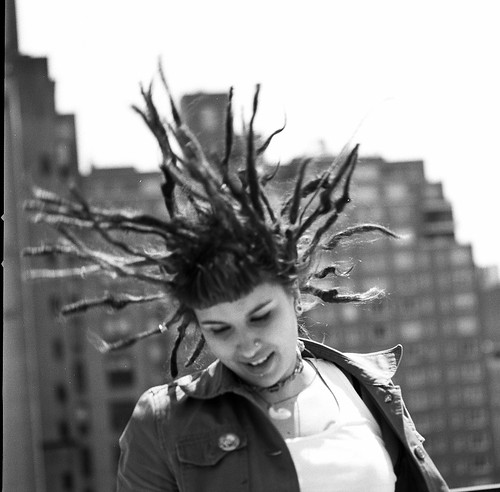 have a lovely day

I just realized that when I smile, I've developed "crow's feet" at the edge of my eyes. At the age of 31. I like to think of them as "smile wrinkles." here are the few dreadies that I've done so far. Im realizing that its harder to do them myself than to have a friend do it. hah
anybody near syracuse, NY want to help? haha
anyways its getting there-just really slow..

( Collapse )
I checked the memories but didn't see anything on this......has anyone used Sun-In, or any kind of spray-on lightener (basically watered down hydrogen peroxide) on your dreads?

I know that stuff is bad for normal hair cuz you don't wash it out right away, but I'm wondering if it might be ok on dreads since you just spray on, avoiding too much soakage of chemicals into the middle of the dread? Any ideas? i just saw the awesomest thing on ebay; a glow in the dark wig! :D
im gonna order one, cut all the hair off and crochet it into some of my dreads and dread some of it and plait it in to my loose hair :)
and heres some random pics for you.

x posted to my journal
( Collapse )


So i took advantage of the ample light compared to my apartment and took some photobooth shots.

so, i took out my dread extentions, only to find that i have little bald spots all over my head,
my dreads were really tiny, and i'm guessing thats why?
maybe its cause they were really long and the weight was intense all at once and i didnt GROW the dreads out.. y'know.
i dont know.

does anyone know any sweet ways of getting shitty stuck short dreads out of hair?
cause some of these little crapsticks wont come out.
and i'd much rather get fatter dreads just to see if that helps with the baldy ctrl.

experienced thought out posts only please,
idiotic posts will be baleeted.
-hyper mare.

I had an out of character moment today.

I was walking downtown, kind of in a hurry to get back to my car before the meter ran out, kind of stressed for various reasons. I was passing by a park and walked past some people sitting on a bench together. One guy in particular looked maybe late 20's, shaved head and scalp tattoos. After I was about 5 paces past them I heard him say "Go wash your hair." It was just loud enough that I could have easily pretended I didn't hear it, but without even thinking about it I half turned, still walking, met his eyes and flipped him off. His friends burst out laughing, I don't know if it was at him, or me, but he didn't even change expression, just stared at me like he hadn't expected a reaction at all.

Afterwards, of course, I thought of all the witty things I could have said instead of that, but when it comes right down to it I think it was appropriate. Mostly I'm just kind of proud of myself - I'm usually not the kind of person to stand up for myself. It was just such an instinctual reaction. Sure, it wasn't the most mature thing to do and "two wrongs don't make a right", but whatever. It's just nice to know that on some base level I won't let people walk all over me. Cuz like I said, it was very unlike me to do something like that. But then again, that's only the 3rd negative reaction I've had about my dreads, 2nd to my face.

It was kind of ironic too, because I just washed my hair this morning. I'd used up my the last of my shampoo (the same bottle I've had since I started my dreads 1.5 years ago - how's that for money going a long ways!), and I had JUST bought a new bottle and was heading home with it.

Wow that turned into a long rant about a relatively boring story. Anyways!


Who here is in the Detroit area? I'm from SK, but at the end of this week I'm putting in my 2 weeks at my job and june 1st I'm flying to Detroit for a month. No real reason, I just need to get away for a little while before going back to school and I have a free place to stay down there. So if anyone has any cool ideas for stuff to do, or any festivals or anything going on in June, I would love to hear from ya!

just wondering where all you lovely dreadheads are from. i'm from canada. ewww. i hate it. i hate winter. i'm moving to jamaica when i can. as soon as i can. getting married to a good looking rasta man and smoking weed oh and being a doc providing the people of jamaica with affordable, quality health care. make that corner of the world a little better, change a few people's lives. my life plan. anyways. where y'all from?

i've been meaning to post here for a couple of weeks now, but haven't managed to find the motivation 'til tonight.
i dyed my dreads on saturday, they turned out a bit brighter than i was hoping they would, but the color is growing on me.