for those who missed it:

is awesome.
My pal helped me with these yesterday. It took forever, and Ive still half a head to finish off myself. Am rocking Sonic head at the moment.
Excuse shitty phone pics. Will post more when I've done the whole head :) (ps. Using photobucket, cant seem to embed these pics as I would normally, so links until I can figure it out!)Edit: Sorted! xx 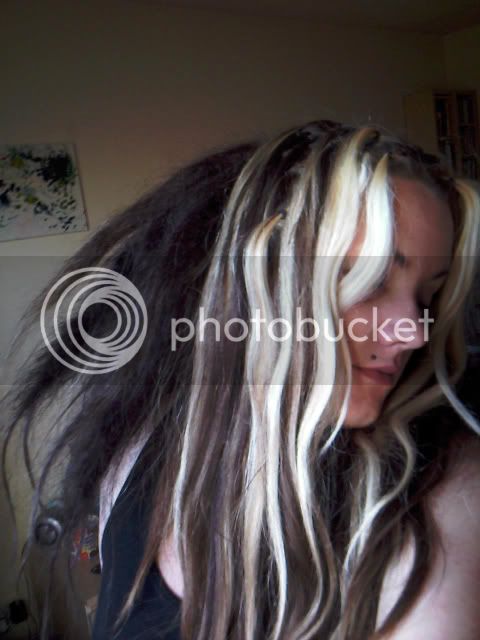 Not the best picture, but I thought I would share it anyway.

I was wondering this a while back and I think it's a really good idea. We often get post here about people looking for help in their area with their 'locks, perhaps those who do maintenance and installation could all put themselves up for this?

Basically just a map of the world, with your username and a push pin where you live - no personal contacts obviously. If we put this up on the info page it also gives people a good idea of how much of a real community there is going on here and how many different countries the members span. It's just a suggestion, but it popped into my head last night and it stuck.

No idea of how to make the map successfully, I'm not geeky enough to write up a script that does it the way I want it.

EDIT: my lovely girlfriend has just shown me this website - http://www.frappr.com/ almost exactly what I was looking for.

I have headlice, which I am not very pleased about.

I treated mine (and my dready friend Alex, who also has lice), last week with Full Marks lotion, and we're going to do them again tonight. I thought I'd got rid of them but I found a louse this morning, so I'm treating it all again tonight and being very upset.

I have read the extensive, and very helpful memory entries on this subject but I do have a question...

How do I get the eggs out of my hair? My hair is really dark and the white eggs are really obvious, even if they're dead (I think most of them are). I obviously can't comb them out, so how do I get rid of them? They sort of go around the hair, so they're not just loose in there. If they were I'd vaccuum my head or something. I've tried picking them out but I don't seem to be having a lot of success.

Just in case you got tired of seeing my mug...

My band played a show on Friday night. My lovely lady took pics.
The evidence follows. So yeah people call me NahNo I'ma 19yr old feller first time poster, I've been looking through and following this community for a couple months now, and I've seen all these posts about people from different ethnic backgrounds, but up until now I haven't seen any mexican dreads, so I decided to post some of my dreads. While on a trip back to my hometown of Acapulco Mexico, I decided to go to a fair held every July, and at this street fair there is always about 4 blocks of dreading, It's amazing. Straight down these four blocks all you can see down the sidewalk, people dreading other peoples hair, so of course I had to get mine did. That was last year and i plan on going this year to get some maintenance done, but for now here are some recent pics.

I found someone awesome at a salon nearby that put my hair up for me and I think it came out awesome!

edit: for some reason the pictures came out really small but I posted them in the high quality version.. so if want a closer look, just click on the picture twice and it should be a more detailed pic :) Well, after mobs of people at both Wal-mart & Target telling me there's no such thing as a Neutrogena product for hair (pft), I visited  my local, trusty CVS for some  TP and VOILA!  Neutrogena  anti-residue shampoo.

So, 5 days after almost annihilating my dreads with the Herbal Essences degunkify, this saved their lives. It's tightened them back up nicely!

Just one. Sorry about the lack of face, but I'm in a bit of a hurry. I'll post more later on.
This is the right side. We're messy, but pretty tight! Sorry this is so contrasty. My hair is so dark, I was trying to pick up the texture.

I haven't posted anything to this community in a long time, so I thought I'd get all involved and whatnot.

so many people on here complain about flat dreads! eff that! so many of mine are flat and it rulez! we need some flat positiveness in this forum no? lemme see your flatties!

I really like to wear my dreads in a bandana.
It's probably my favorite thing ever ♥
heya!
i've posted a couple times in comments and such, but no pickchas as of yet!
i went to California/disneyland with the school band (i'm 17) for Heritage festival a couple weeks ago.
it was an amazing trip, and we took first place in our division! yay inner city schools!
i've stolen some of my friends facebook pics, as i don't have a camera right now.

I've been watching this community since 2005
and It's been almost a year since i started my dreadlocks on june 29 2007,
so i'm a little less self conscious about them now in comparrisson to all of your lovelies!
so here i go =)

I sat and had a lovely chat with my uncle Billy yesterday, he recently cut off his 17 year old dreads for charity.
You'd think that he would have been sad to have seen them go but he's actually pretty ecstatic, apparently the best thing about his dreads being gone is that his neck is about 2 inches longer ^_^
We were both talking about how we start dreads, i do the normal back comb and palm roll method but i was suprised to learn how he did them:
He starts them off the same as me but then kindof goes immediately into doing vigorous maintenance, felting and crocheting in loose hairs etc... apparently thats how the majority of European get started hence why they have such a smooth appearance :/
I was under the influence that by binding there movement by excessive crocheting it'd hinder how  they knotted in the long run but according to Billy they turn out fine.
Also someone wondered whats the longest time someone had been using felting needles, he's used them for 6 years and had no problems.

Also I finally extended the sides of my dreadhawk , I finally have a full head of dreads :D well sortof i still have an undercut...
Im not sure exactly how they will hold up, I only had 2 inches of hair at the side so im assuming they are going to fall out quite alot; i have had a few of them in for 4 days now and they still seem secure so i'll post some pics soon and let you know how they fair.
love to all of you :)
I'm curious, how many GUDUers have had to combine really thin locks? How did you do it? I read the memories and I am considering lightly threading some of my thinner dreads together, with sewing thread. I read that someone had luck with that, and I would use hair-colored thread. Also, crocheting them in is not an option, they're too small, and too tight.

I tried to loosen the thin ones so I could try and backcomb them together but it's been 1.5 months now and they're surprisingly hard to untangle. I had some luck with a few but its getting harder the longer I wait.And I'm losing a lot of hair when I try.

A *lot* of my dreads were made waaay too small. Redoing them all is not really a great option for me. I'd like to try and make the most out of these. I do have some decent sized ones that are getting really tight, and they keep me happy. They're the minority though.
Just wondering what to do with those little ones..

And so it's not text only

im so excited, guys.
i discovered today that my locks are finally long enough to put in a full ponytail.
this may not seem exciting to most, but this is the longest my hair has been in 5 years.
growing my dreads out is a really huge step for me, even though theyre still tiny.
i feel like i have a wonderful living tree growing out of my head.

Whats the best way to start dreads? I was thinking on getting extensions first to see if i like it.

Yet another knotty Asian post for them asians looking to get into locking.

So long time lurker of this lovely knotty community. Someone posted recently about not seeing any mexican/latino/chicano dreads. So I thought I would shamelessly flaunt to you, my gorgeous boyfriend! I dreaded his hair about 2 years ago. He is Mexican and Irish. Words cannot describe what an amazing guy he is.

We backpacked through Europe and saw so many dreadies, he vowed to never cut his hair.

My grandfather got me drunk last night and my intentions of going to bed turned into drunkenly taking pictures of myself.

Just a shameless plug for

bobandiarepals . I am so totally stoked with the hat I got off her on etsy. Best tam ever.
http://www.etsy.com/view_listing.php?listing_id=11716896

My dreadies are 14 months now. They're growing up so fast! ^_^ I just wish they would grow in length.

I haven't been as active as I'd like in this community lately. Between changing psych meds and major drama going down in my family I haven't had time to devote to this place. As silly as it is, dreadlocks (both yours and mine) have been a giant contributor to keeping me sane. Watching their progress has reminded me that no matter how shitty things get, change is always on the horizon. It's crazy that hair can do so much for the soul but it does.

Anyway, enough of my Seroquel induced rambling and on to the photos.

I love you guys and your dreadies. ♥

This query was posted in a comment on an entry a couple weeks back and was hoping if I offer it up to the entire community someone could help me out:

Has anyone been to/heard about the dread goddess in Portland at the Akemi Salon? Would you recommend this place to start/maintain dreads?


She seems like she knows what she's talking about. Everything on the site is consistent with the memories on GUDU (no wax, patience, etc).

I live an hour out of Portland (Salem) and this would be a great option for me, unless anybody can suggest another good place nearby?

Thanks guys, you all rock :D
Collapse