but my dreads have been absolutely perfect for about 2 weeks. i just want them to grow!!!

I Wash with Dr bonners peppermint soap and do the salt water rinse...My girlfriend worked on them when she was down and I <3 her even more cause they look soo much better....more fatties now which is..the beeessssttt in my book....Hope everyone has a wonderful day.. 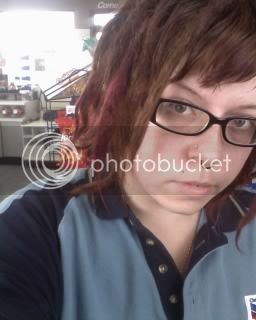 
hope you're all doing well!

I've been a lurker for some time now. I started my dreads the last weekend of June in 2007, so they are almost a year old. A bunch of friends came over for a dreadlocking party and spent 10 straight hours working on my hair. It wasn't finished so I spent a couple hours a day with various people helping me out. About a week later it was finally all done.

Due to being uninformed, lazy and new to the whole dreadlock experience I made quite a few rookie mistakes. I put wax in it for the first couple weeks. Ugh! I did pretty much no maintenance, so my quirky and interesting loops soon formed zig-zags that grew into each other and formed very large, very fat (yet, oddly flat), and pretty darn short dreads. Does that make sense? So my hair is probably 4-6 inches shorter than it was pre-dreads. I've been washing with the Dreadheadhq shampoo and Dr Bronner's (I like lavender and peppermint). I wash probably once or twice a week.

A couple weeks ago I carefully brushed out a dread next to my face, because it had swallowed a bead and I wanted to get the bead out. Then I re-dreaded the hair. But when it was loose, my gods, it was sooo much longer than the rest of my dreads! That's when I went "damn! they have shrunk so much!" When I combed out that one dread, there was icky gunk left on the comb... probably from the wax I had put in my hair.

So, since the school year is almost over, I am going to comb out my dreads and then start over. I am a middle school teacher, so I'd like to wait to fuck with my hair until I do not have to work every day. I am hoping that Lish will have time to do them for me. I live in Tukwila, so I'm very close to Seattle.

I did them myself, and they were really, really loose. I also made the mistake of dying them when they were WAY too young, and a lot of the ones in the back unraveled way too easily. I didn't section my hair, and I'm happy with the fact that they're not perfect and all the same size. I just have to fix the back a bit. On top of that, I wear a hat while I'm at work. Yes, my bosses don't even know I'm dreaded. Four of the people I work with know about them, two have actually seen them.

The softie hat I'm wearing I made myself, thanks in part to a pattern that

a sort of real update from a woodsy adventure with the boyfriend!

and then some random pictures that kinda have my hair(?) hah