I was at the mall tonight (THEDARKKNIGHTHECKYEAH) waiting for some friends, and this old man (like maybe 60) came up to me and said, "I'm sure you hear this fifty times a day, but your hair is lovely.  It looks fantastic."  And I was a little surprised but mostly just pleased as I thanked him, thinking how cool it was that a 60ish year old man could compliment a 20 year old girl with 5 month old dreads - not even the lovely long smooth year-old-or-more ones.  The frizzy, loose tipped, crazy twisty mess that currently inhabits my head.

It made me think about why I chose to dread my hair.  I've been asked by countless family members, friends, random people... but very few have actually complimented my progress.  And that's not too big a deal;  I didn't do it for them.  I chose to dread up because I'm not the type of girl who wears makeup or takes a long time to get ready to go somewhere, and I don't know brand names or where to buy the coolest stuff, and I don't want to care if people look at me funny or talk about me (I'm getting there)... and having crazy messy unconventional hair seemed like a neat (forgive the pun) way to do that.  To tell the world "screw you guys, I look however I want to look and it takes me five minutes to roll out of bed and get out the door.  My boyfriend never has lipstick or eyeshadow smeared on his clothes, he never chokes on the scent of hairspray or perfume, and I walk in comfortable sneakers and flipflops from thrift stores and KMart, okay?"

I was driving home with my hair down and the windows open, toying with a dread... and I felt prettier than I have in a long time.  My dreads make me feel like ME.  I feel like the awesome boho hippie chick I want to be, the girl I guess I've always been inside, but tried for so long to hide.  All through middle and high school I tried to be THAT girl.  The makeup-clothes-always-the-height-of-cool girl.  But that's not me.  I feel like my dreads have finally given me the confidence to be who I want to be.  I know they probably look silly when they're down and all fluffy and sticking straight up, but it's a process, and someday I'll have the gorgeous smoothysmooth ones.  And you know, even if I don't, I'll still be happy with them.  Happier than I've ever been with my hair.

Now if I could just get my lip re-pierced and start on my Harry Potter sleeve, I'll be happier than ever with my overall appearance.  :D

its been awhile-at least a couple months since I posted..(okay maybe one month)
but yeah I dreaded almost the rest of my hair-still have this little section left to do-Been putting it off though and seeing how it would dread naturally.
Pulled apart a bunch that were growing together as well.

( Collapse )
I've wanted to post a picture update, but I haven't had the time. I still don't have the time, but I have a backlog of things to share with gudu!

First and foremost (this is from my personal blog):
"Update about my cancer, which I have told people individually but have not yet written about. Test results show that I can no cancer in my uterus, it is localized on my cervix and is not spreading. I have cancerous cells on my cervix, but am not presenting with lesions. This could be a potentially good thing - we have either caught the cancer in early infancy or I have non-aggressive cancer. We will find out again when I get checked out again in December. If this is just very early on, then we have multiple treatment options that should preserve my baby oven. If this is non-aggressive cancer, then my body might be able to fight it off completely on it's own (provided I maintain a healthy diet, exercise, and maintain a low stress lifestyle).

I have very mixed feelings about this, and several concerns, but the ZOMGTHISISURGENTLIFEORDEATH --> headexplosion feeling has dissipated."

Secondly:
I visited my family in MD and their freak out about my hair was much less than expected. My younger brother approves. My military father would like me to comb them out but he's keeping his mouth mostly shut about it after his first three requests for it.

And my mom wants me to comb them out but since they make me happy she spent time helping me separate some roots at the back of my head where I cannot see and helped crochet some loose hair at my nape back into my dreads. Then she decided to tell me "I want a weave, I like "black girl" hair" which, from my Asian mother, is a weird kind of compliment I guess. Although, she did claim that

lishd did my hair wrong because "she isn't a black girl" and because my head wasn't sectioned like a brick wall.

My five year old wants dreadlocks. I told her to wait until she was at least 10, and then she asked me if she still had to wait until 14 to stretch her lobes. I somehow think she might remember these things until it is time for me to back them up hah.

Finally:
I am moving to WA much sooner than originally planned. Like... I will be out there in a week!! My flight leaves next Friday. I'm excited!! I will have pictures for gudu when I get all my crap delivered and unpacked in WA.


I hope everyone is having a great day!!

This is a terrible picture of me, but Bunny is trying eating one of my dreads, and I thought it was funny.

Hey my name is Amber and I'm a hair stylist in Los Angeles. I specialize in dreds so I though what a better community to join than GUDU! Here's a photo of my old dreds. 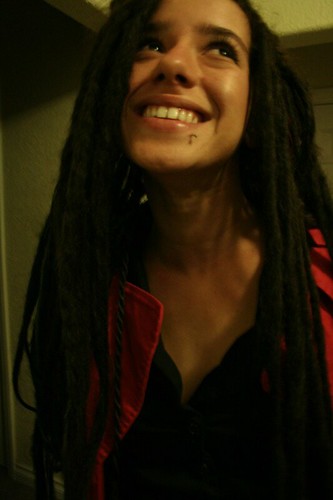 In response to recent harassing from the lovely Lish, I give thee photos from my trip up to Seattle to kik it with the aforementioned Lish and the as yet unmentioned Joe. Seattle rocks my SOCKS, as do Lish and Joe, and I got a bunch of cute pictures so check em out....

Last night my best friend, little sister and I decided to do a sweded film (ala the recent movie Be Kind, Rewind). My friend works at a convenience store, so what better movie to swede but Clerks? Check it out...

Be sure to watch the original trailer first...


Our version...I'm mostly the camera-man, but I played a few filler roles as well.
(I'm the one with dreads, of course.)

i've been doing crafts all day for a craftshow tomorrow and a few hours ago i tore my dam room apart looking for my pincushion. i needed it so dam bad.. couldnt find it. this is what i just finishing making btw, a kiwi brooch:

anyways.. so i decide to take a shower.. and a pincushion came out of my hair and fell into the shower drain.. weeeird scenerio...

aaannnndd a pic of myself because everybody is a little vain: