So I have an issue that I'm a bit worried about. I have had my dreads for almost 4 years now, but have always had a bit of what looks like white flakes forming at the ends of the dreads. They are fairly thin, so I usually just let them air dry, occasionally wringing them out with a dry towel, a couple of times through the day if I'm home.

My hair does not smell like mold or mildew. In fact, in most of the cases, it either smells like my shampoo or just like, well, hair.

So I guess my question is, how would I know for sure that these white flakes are not in fact, mold or mildew? I checked the memories to find an exact description of what would be mold, and found a really good way to try to get rid of it, if it is. If I were to cut into one of my dreadlocks, what would I be looking for? Would there have to be a smell, and would be dry and flaky or moist and icky? Someone please help clarify....

Here are some bearable shots from a recent show... there were a few I really hated. I'm ok with these three... for the most part. This is what happens when Avy can't take pics... grr! 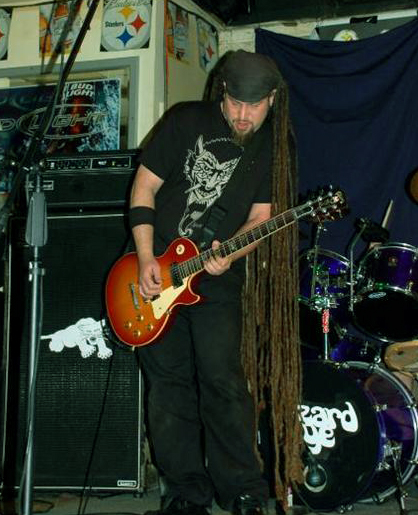 hey everyone.
i've been a lurker here for awhile, trying to work up the nerves to dread my hair, but in the meantime i wanted to share some pics of the only dreadhead in our house.
( Collapse )

hope this is acceptable!

here is a pic of me and my sis on our trip to seattle.

and i have been scanned again.

...and dyed my dreads. The picture is kind of crappy quality, so I'm not sure if you can tell the colour or not. In case you can't, they're dark purple and I have a few blue ones! No more blonde! Anyway, I hope you guys are having a great end of the week. I'll be posting semi-better pictures of my hair tomorrow, and maybe if you're lucky a few to naughty_knotty. Take care guys!!

Just got the internet back so i figured id throw some recent pics up.

Me at work tellin people to leave

My 8 year old daughter is a toe-head and she's been asking me the past few days if I could dread her hair. I've explained to her before that it can be a painful process to backcomb them and she declined. I've told her that once they're in, it's a commitment. I'm not going to do all the work only for her to decide that she doesn't like them and then have to comb them out. It's hard enough to comb her hair on a daily basis with her pissing and moaning about how it hurts (her hair tangles easily). Perhaps she's getting tired of it and realizes that she'd just rather not have it brushed any more and would rather have it look like mom's hair.

I've told her what it means to me to have them. I told her that I won't do it for her unless she's absolutely certain she's ready and wants them.

She's been asking to have them done for the past few days. I'm going to give it a couple more days and she if she's still asking.

I'm of the opinion that my kids shouldn't have anything done to them unless they want it when it comes to their appearance: earrings, circumcision, hair cuts, etc.

If she's asking for it, though, I want to be able to be a part of it if she wants me to. I just don't want her regretting it 2 days after.