Hi. New here :]
I love dreaded hair.
I haven't started my own dreads yet, but I was wondering if anyone had pictures of someone with semi-dreaded hair?
All I can think of is Christina Aguilera in her 'Dirrty' days.


Edit:
I've always been told that you have to have "the right type of face" to look good in dreadlocks. What do you think? Could I pull them off? Also, if I started my dreads in say... 6months, how much do you think my hair would shrink? up past my shoulders maybe?

most recent hair picture under cut

i'm so excited about these pictures!
i went camping about an hour north of Yellowknife, at the Cameron Falls. The whole weekend was amazing. There are some pictures missing from this- like when I stripped naked because I got covered in freaking leeches. I have to get them from my other friend :( Seriously, most priceless photos ever.
But without further adu:

Before anyone says anything about it, no, there are no dreadlocks or even a discussion of them in the below post... but a few of you mentioned that you were interested in the following stuff...

Last night Avy agreed to show off Xavier in his natural state (i.e., she let me take a "belly pic" for posterity.)

You know how Demi Moore was on the cover of Vanity Fair when she was preggers about 10 years ago (or however long ago that was)? She was nude, but she covered the naughty bits artfully with her hands. I think the shot was taken by Annie Leibowitz, and it was classy and controversial. It was such a big deal that people everywhere talked about it and parodied it.

This pic was taken by a Jew, but that's where the similarity ends.

So, without further ado, I present to you Avy and The Belly, aka Xavier in the package.
( Collapse )

As you can see, great care was taken to ensure the wardrobe was consistent with the gravitas of the situation and to capture our sober and introspective nature.

Also, we did a 4-D ultrasound... I'm pleased to present to you our boy, Xavier, The Smallest of Bears.
( Collapse ) found my camera lead :) so now you lovelies can see what my hairs been up to over the last few weeks.
bit less pictures than last time but ah well.

once in a blue moon i turn into a girl :P
( Collapse )

henw backcombing, the dreads get really frizzy. what should i do? will they de-frizz as time passes?
i need some serious help. haha id like to do it naturally, with little product. thats why im not buying the kit.
none of my friends have dreads, thats why im bothering the shit out of you guys! haha :]
please help?

X-Posted from my own LJ.

Because nothing happens to me that I don't feel the need to report on...

I was at Whole Foods, eating lunch this afternoon, as usual. I had just gotten off the phone with Avy when a harried older woman approached me and said, "Do you mind if I ask you a question?"

Being the eternal wise-ass, I replied, "I believe you just did."

I figured she was going to ask me about my hair, since that happens all the time. It was bound to be the same shit I always get from strangers--the usual "How long did it take to get your hair that long?" or some such.

She grinned and said, "Can I ask you another one? It's bound to sound really prejudiced and kind of offensive, but please bear with me."

She said, "I'm headed for the airport in Philly right now because I have to fly home to Reno. I have this really cool little glass pipe I've been using to smoke weed out of while I was here, but I don't want to try and take it on the plane with me and get in trouble. Do you smoke? Or do you know someone who might appreciate a little gift?"

She produced a small glass pipe--a little straight pipe with a charred chunk of weed still sitting in the end.

I looked at it and said, "So, you just decided to ask the guy with the dreads if he wanted your excess marijuana and drug paraphenalia? Hmmm... you could get in trouble with that for sure. That's an arrestable amount. Sure, it's a 'personal use' amount, but you can still get arrested. Wouldn't it be funny if I produced a badge right now?"

Her eyes got a little wide for a second, and then she laughed.

I said, "I don't smoke, and even if I did, I certainly wouldn't take something like this from you in public with so many people around."

And then she walked away.

In case you're wondering what happened to the pipe, I snagged it for my bandmates.
No sense in letting it go to waste.

So i just went swimming in the ocean for the first time since ive had dreads... and I LOVE how tight the saltwater made my hair feel. so i decided to mix up some accelerator with saltwater and lemon juice. my question is how often should i use it? i am currently washing my hair about 2-3 times a week. should i use the saltwater after i wash my hair? or like the day before? also do i need to rinse out the saltwater after i spray it on? i checked the memories and couldent really find an answer. any comments would be greatly appreciated. My dreads are right between 10 and 11 weeks old right now. I was swimming and noticed my freckles were really prominent today, so I took some pictures.

( Collapse )
Ok, just a brief question. I bleached my dreadlocks a few days ago and am going for a quite bright mix of directions purples.
Does anyone else find they use more dye on their dreadlocks than with normal hair? I seem to use about double the dye on my dreads than on normal hair, so never having used a dye like directions before, and assuming i would use 1 pot for short-ish hair, would two be enough for dreadlocks or do veggie dyes get sucked up into dreads more or less than box-type dyes?

Also, I have no good pictures of this set of dreadlocks, but this is what i have:
( Collapse )

on the way home tonight we swung by the pet store just for the heck of it.  this is the same pet store that we picked up a kitten back in '04.

well we came home with a new kitten tonight :)

here are two pics of me and the kitten with the second one showing how my dreads are doing. 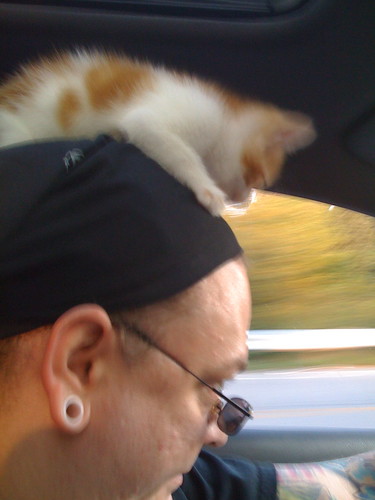 on the couch using my laptop

Today must be stereotype the dreaded person day! I was just walking up the street to pick up a take out order. As I was leaving a young kid, 16 or so. Dark clothing, undercut, looking all punk and bad-ass is like "Yo you got a paper on you? " and I smirk, instantly thinking of the post made earlier by

cottonmouthdn. I politely say no and continue down the steps. "You smoke weed?" I just shoot him a smile because I'm trying to keep from laughing and keep on walking down the street.