you know how sometimes you forget you have dreads because you see them every day and its just so normal?
well i always wear my hair back tied up for work, but now its down while i'm at home and i had one of those 'wow i can't believe i have dreads' moments when they fell in my face. i forget i have them, then realize, and sometimes i'm surprised! hah

the sixteenth was my 4 month dreadiversary. I was having an extremely random day and decided to check out a tattoo artist I had been recommended after making the decision to leave my old artist, who garnered a very negative environment. This new guy was amazing, I connected with him right away and he does amazing work. He booked me for that night, and so, only partially because of the date, now I feel like my dreads and this tattoo are kind of connected.

Specifically, I feel like my dreads-- and this tattoo-- are connected to my happiness. I started my dreads at a period in my life when things were finally starting to look up. And I got the tattoo exactly 4 months later, at a time where everything is so much better than it was not even half a year ago. It's the first ink I've gotten since I started these gorgeous ropes on my head, the first since I got out of an insane 4 year long relationship, the first since I moved back home, and the first tattoo I've had done when I was in a wonderful, good place, physically, mentally, spiritually, instead of getting one to help myself get out of a bad place.

I only have one picture to post for now. 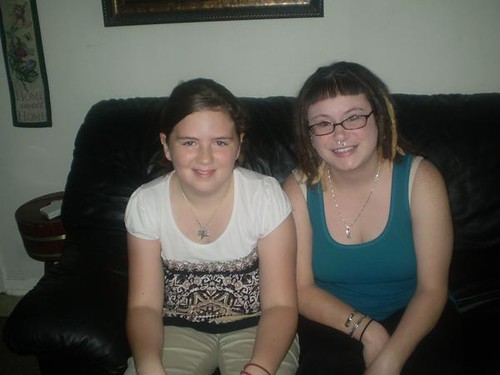 My eleven year old cousin Kyla and me at home.
You can sort of see my recent septum piercing in this photo.

My dreadies are about to turn 18 months on September 5. I love them more and more every day, but I sure as hell wish they'd grow already!

More (and better) pictures to come soon, I promise.

But i come bearing pics. Excuse the strange ones... I was being
retarded. I really have no idea. ( Collapse )

so in the first few weeks of having dreads i was palm rolling and messing with the dreads right up in front waaay to much and it caused alot of breakage and thinned out the four dreads in front since i have very fine hair. now at 3 months old all of my dreads were about the same size except for the ones in front they were very thin which bugged me soo much! so last night i threaded one of the dreads into a large eyed needle and then sewed it straight up through the middle working my way through the center of the dread until it came out of the tip. then i backcomed the two tips together now you cant even tell that they were two seperate dreads. i did it with the other two thin dreads too. now instead of four thin loopy shitty dreads up front i have two nice fattys up front. they look soo much better now im soo happy.

has anyone else done this method of combining dreads? has anyone had any negative effects due to this style of combining, like the two dreads not staying together?


p.s. i will post some before and after pics as soon as i find my camera. and also are any of you dreadies from the central coast of cali?
Has anyone here ever dyed their dreads a dark shade of brown or black, starting from blonde dreads? If so, would you pleaaase show pictures?
I am just bored of being blonde. I already look like I am 16 but I am 25, and I think darker hair makes me look a little bit older. I want a really natural shade of darker brown, not quite black. Black works when it sometimes fades out to that nice warm honey brown but until then, dyed black always looks waaay too fake to me.
And who thinks dreads look better without fringe/bangs versus with fringe/bangs?

howdy people
dyed my hair again ,now its little different colors
used pink,violet and blue..
i love how they look now
and im proud hehe
take care ya all
( Collapse )
so i went to a wedding in wisconsin last week....took the train...drank lots of whiskey...played the wedding song on the banjo at the wedding/was the best man/gave a speech...drank whiskey...watched beautiful sunrises, saw old friends, etc. etc. it was lots of fun.

so here are the pictures from that in absolutely no particular order at all.

( Collapse )
I know my dreads are only a day old, but i really fancy the idea of felting my hair and i wondered how many months i should wait before attempting it? I imagine if i did it straight away it wouldnt hold very well.

I think putting wool in my hair is such a cool idea!

Any advice would be welcomed - thanks guys!
Collapse