Hello all,
Tonight I was bored. I decided hey, I have three very small and thin locks that aren't locking. I know, I know...time and patience. I just wanted a bit thicker one. So I decided to brush them out.
( Collapse )

I have a question - I have locks and I have posted on here, and now my son seeing my locks and me claiming "I don't have to wash my hair as much" wants to have them too. Now first, the reason I said that I didn't have to wash them as much is because I used to have mid length to bottom of my back length long straight silky thick dark hair - and it required a LOT of care! Products that is.

Hi, new person here *waves* I don't have dreadlocks, but my mom is from the islands, so that whole side of the family has them and their all waiting on me n___n

So afew days ago my dreads officially turned one year old!!!

Its been a brilliant year. I hope everyone had as good of a new year as i did!!

I am currently touring around europe but i will be back home in australia in just under two weeks and will post up a timeline for you then.

Ok so i bit the bullet and got my friend to section off my hair and we had a go at dreading it....

Updated look at the start i am not sure on the results
any idea's???

My journey began when I stepped out of some manufacturing company I was working at, this was around april. I'd always jokingly say, "Hey, I'm gonna get dreadlocks..just wait and see." I was serious half of the time.
So I finally  made the decision around May when I went camping with a boyfriend at the time. I had stop maitaining my hair, by that I mean, stopped brushing and keeping it away from tangles. I started getting a few small clumps..and that's where it began.
During that camping trip, one of Johnny's(the bf at the time)  friends offered to do a lock on my hair. During this time his friend was telling me about his dreadlock experience in Argentina.( Collapse )

I thought I'd share some better pictures of my dreads. 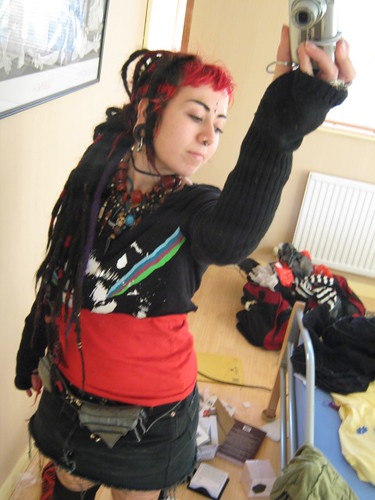 ( Collapse )
Plus here's some NYE pictures! Many of my friends are dreadheads too.
( Collapse )

last night i colored a few of my dreads i colored 5 of them dark blonde and 2 of them a dark red kinda maroon it went really well i havent colored my own hair in 3 so im suprised how well it went.
( Collapse )

Hey everyone :]
I hope that every one of you had a great New Years.  I'm really excited to be starting a new year as a dreadhead... I hope to usher in an entirely new and unique bunch of experiences.
I got together with a friend today who is just beginning her dready journey... It's cool to have a person to share experiences with, because I think that my husband is getting a little tired of me talking about my dreads haha.   It's wierd being the one with 'dread-know-how', answering questions and such... when it feels like just yesterday that I was entering into this process without any idea really as to what I was starting.

i thought i post a few photos of me and my dreads. they're 7 years and 9 months old and they actually should be heaps longer. but the ends keep on breaking off, which is quite annoying. still - i like them. : )

I like the reflection of my dreads in the mirror :) They're almost 3 yrs. Happy 2009 Everyone! 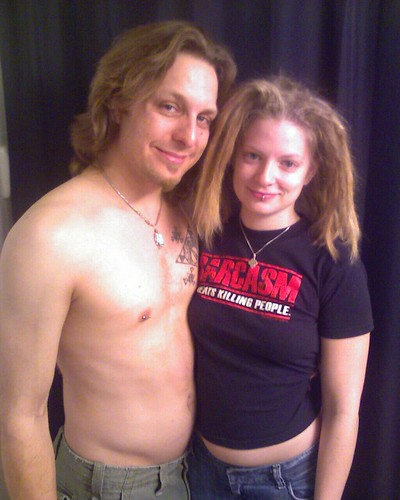 We'll be dreading his hair next!, originally uploaded by geminibalance.

Today morning I left from home to visit a school friend,- the first who has a baby. On the way I got a call that I shouldn't go after all because they had a very tough night. So instead I just visited that friend that I was supposed to visit her with. From there we went to another friend's place who cut the bangs of the girl who I went with. The she left but we two decided to dye my hair today.
You don't know how much problems I had with deciding on the color. I wanted light brown, almost blond, because I just loooove that color on dreads. But, unforunately, not so much on noral hair, amd now 6 locks are opened in the front for bangs. I really love dark brown for normal hair but not so much on dreads. Then there was red, but you know, that natural kind of, a bit brownish. Yesterday finally I decided that I'll pick that but today when I told it to my friends they both said I should pick blond/light brown. I have to mention, that I had the same dilemma in the summer and then all of them said I should never think of blondish, I should go with red..Ugh, friends...=)
But well, we went to pick a color. Something blondish brownish. Finally we picked this one and bought 5 boxes of it.

We actually meant to use 4 boxes ( we learned well in the summer that 3 boxes are not enough) and I'd have taken the 5th with me back to Finland so I can redye the stems when it's needed. Well, I will need to buy more if I want to do that because all the 5 boxes were used away.

But anyway, before we did anything we opened one more lock that is still part of my bangs..at least half of it, the other one is a baby dread now.