I just found this on Facebook, taken at a friend's birthday last night. I've no idea what I'm doing.

I think there were about 7 people with dreads in the room at one point...

After posting my last set of photos a few people asked for some more close up shots of the head band I was wearing. I did not make it myself, but I did turn it from a choker into a head band. It's bdiffrent colored hemp in a simple no twist pattern with wooden beads added in. The three strands are connected at each end and twice in the middle with a small piece of hemp. I added on a single row of non-twisted hemp to extend it so it fit around my head. I just tied it to one end and added a loop to go through the wooden bead on the other end. Quite simple really. Hullo again! Thanks for all your comments. I've decided to go ahead and dread my hair for sure now, and am just waiting to get a better comb and re-dye my hair once more before I do it! However, a quick question... my gf is going to help me do it, so I was looking around for videos that weren't aimed at specifically nappy-hair (mine, while pretty damaged, is fairly soft and fine) and didn't find too many. Someone suggested following the knottyboy one, minus the wax steps, but while watching it, it seemed that maybe minus the wax their version would still leave the dreads fairly loosely locked? Maybe it was just the fluffiness of the guy's hair, idk.

I did also find this video that seems about half back-combed and half rip-and-twist... obviously I'm still very much a newbie to the whole dreads thing, but that seemed like it might work pretty well. Is this nuts, or have people done similar things with good results? I've read in the memories that using thread/elastic isn't a good idea on the ends, like she does in the video, so I'd steer clear of that, but do you think that version would hold without it?

Basically, I was looking for something that was slightly more polished than the back-comb-only baby dreads I was seeing, but less braided than the rip and twist ones I've seen, and didn't think there was anything in between until I saw this video, and so was planning to just back-comb. However, I also have no idea if I have a clue what I'm talking about, so... ;-)

Honestly I'm not crazy about them right now, I think because of how short they are. I've always had long hair so this is a bit of a kick in the ass for me.  Hope everyone is doing well!

Helloo,
this post is deticated to the mistreatment of my friends dreadlocks,
they were created by someone who had no idea, using the knotty boy method.
i recently cleaned up a bit the loose hairs  for her with a crotchet hook.
pulling and pushing the crotchet hook through her locks was really difficult because there is probably enough wax in the middle of her dreads to make a candle.
basically its my job to make her hair good again, combing them out isnt really an option..

I'm going to be trying the deep clean that i found in the memories, i was also thinking of getting a toothbrush out, and some dish detergent, good idea? bad idea? doesn't hurt to try?
heres a picture of her dreads, well.. her. and her dreads, and her ex, drunk haha. 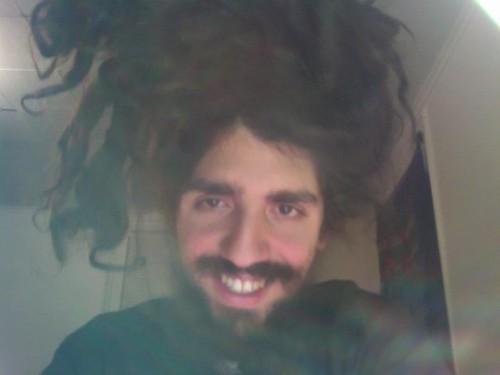 On September 13th 2008 I had Lish start my dreads. I had the intention of posting progress pictures about once a month from then on but life got in the way. Pictures under the cut.

There are days when I don't like the way they look but on a whole I love them much more than I ever liked my brushable hair. Its been one of the best things that I've ever done for myself and it was worth every penny to get them started by Lish. (next time I get work done by her I'm bringing baked goods as well) I want to redye the roots and maybe go to a lighter blond but I promised myself I wouldn't dye them or do anything else until the six month mark and I intend to keep that promise.
Collapse