I remember reading posts when I first started my dreads where people would write "I woke up today and realized I had dreads!" and I was always like.... what? But it happened to me! I rarely look at the back of my head, and the other day I pulled out a mirror to see how they were doing back there, and waddya know! I actually have dreads!

So now that it's been quite a while, I figured some maintenance would be nice. So... anybody in the Bay Area, preferably San Francisco, willing and able to do maintenance? Maybe even within the next two and a half weeks? :D

Two more questions:
1. Do you find that your dreads collect lint? When I first found some lint in one of my dreads I freaked out, and dissected the shit out of it, thinking it was mold, only to find a little ball of fuzz. Talk about a mini-heart attack. :]
2. I've been thinking about dying my hair brown or maybe even auburn. Thoughts?

Hey! I'm going to be putting my second set of dreads in sometime soon- probably within this coming week. I know how to do it, but I'm having someone else do them for me because I don't think I can do my best work on my own head. Problem is, she doesn't know how to do them. Is there a video/tutorial somewhere that any of you recommend that I can show her? Thanks, and sorry if this is repetitive, because I know people ask about this stuff all the time.

I have been feeling frustrated with my dreads - they are 4 months old and formed completely on their own - no backcombing, I just pulled them apart when it looked like some hairs were going where they shouldn't. I have about 10 very fat ones. They are very heavy and uncomfortable. I get a lot of headaches, I can't style my hair without it being painful and pulling at the undreaded hairs at the scalp, it's really hard for me to find a comfortable position to lay down at night

So I was reading over the memories last night and came to the conclusion that since they were only 4 months old, they'd be easy to comb out.

So I took a shower and used an entire bottle of conditioner. Then I did a hot oil treatment and let it sit for a few hours. I started combing and after about 3-4 hours I still hadn't gotten the first one out.

So I went to bed and woke up this morning less convinced that I wanted to get rid of them.. but still not loving them.

Anyone have any advice? I guess my choices now are keep them or cut them off because there's no way I can comb them out. If I keep them, will the crazy amount of conditioner I used yesterday be a problem? As I was combing, all this gross stuff was coming out... i guess it was conditioner mixed with dead skin and dirt. If I really thoroughly wash my hair will it all come out???

update: the first one is gone. it took me a while to figure out a technique but once i got it, it was a lot easier. i am using a fine toothed metal comb to kind of saw at them to loosen the knots up, then pulling hairs out with a pen (ideally i would be using a needle or the end of a rat tail comb) and my fingers

I have a lot of loose hair. I saw a post where someone (unfortunately I can't remember who!) posted saying that their head felt so free after they got maintenance.

Is there a post in the memories with a list of people who offer maintenance? If so, may some one pelase direct me to it?

If not; we should get a list going. (And I know that's been suggested before.)

I feel like I've been posting a lot lately.

..Where's there's more people pushing up daisies than are actually breathing! A few friends and I decided to play in the cemetery and photograph awhile. 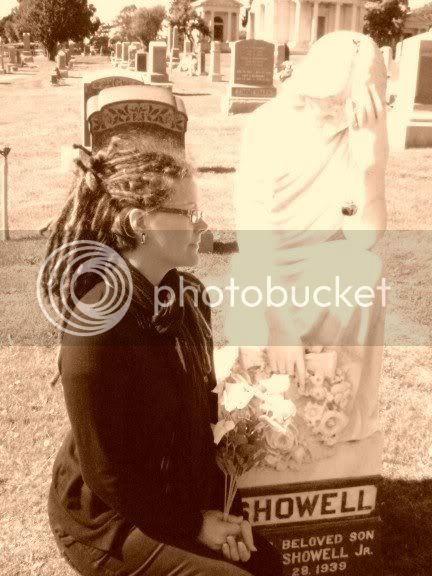 I have a job interview tomorrow. Reason I say that is to set up for why I'm doing this.

I've been doing neglect for a small amount of time. Pretty much, since I did my full-head combining, I've only retwisted it about 2...3 times. That's like...what...a couple months of neglect? Anyway...

Under my braided locs where the newgrowth is, there's a part on almost every dread that I thought was flat. I would mess with it & roll it between my fingers until I said 'screw it' [usually a minute or less after initial touching]. Well those 'flat' parts are actually my hair locking! I've been wanting to lock neglect-style because I think my locs will look more like I want them to in terms of thickness & whatnot. It makes me feel special, because despite knowing it'd lock I didn't think it'd start happening THAT fast. It's only been like...2 or 3 months, and I already got half an inch [or more] of lockiness and about 2 more inches of hair under that 'flat' part that is just newgrowth.

Alright. That's all. I just felt excited cuz it's actually doing it. =)
Collapse