after much waiting and pondering and wanting... I finally have dreads!

here's a before-shot for ya:

I love my dreads already, especially the things they've taught me about myself. for example, I'm surprised at how often my hands want to be in my hair! I'd always known that I played with my hair compulsively (when anxious, nervous, BORED), but it's much more obvious now that I have the dreads to play with. it's a battle, catching myself with I'm fiddling with the roots and whatnot... I'm making headway (pun), but it's becoming apparent that this journey is also going to be one long lesson in self-control. which is probably for the best.

as I mentioned above, I have a few dreads that are quite a bit looser than the others. they're the shortest ones. most of them have about an inch of undreaded hair at the root, an inch of dread, and an inch of loose hair at the tip. my worst dread has only about a half an inch of dreaded, and has lost a lot of thickness. poor thing may be a lost cause, but I'm just going to let it + my other loose shorties do their own thing, and only perform gentle palm-rolling on them once every week - two weeks. we'll see how they do!

other than that, I've got a ton of loose hair already, all frizzy and charming. that doesn't bother me too much... my main concern is making sure that my dreads don't starting eating up the loose hair from my other dreads.

it feels great to have my dreads finally, and to embrace my hippie-dom (not that all dread-heads are hippies, that's just what they mean to me). getting dreads symbolizes making the first of many steps towards becoming outwardly what I feel inwardly, to being that environmental-hippie-freak that I've been moving towards over the past couple of years. because of this symbolic move, I've felt the compulsion to take on more projects that will move me toward my goal! I've started baking bread again, this time 100% whole wheat; I've been reading and thinking a great deal more about how to reduce my environmental impact and how I can raise awareness among my friends and family; and I've started doing yoga again!

it's good to have projects. I'm working on knitting a hat too, and am about halfway done! Pattern is here. I'm trying to enlarge the pattern in certain areas so that it'll end up more like a tam and less like a beret. I'll post pictures when I'm finished!

lastly, I just wanted to say thanks to you all and GUDU for sharing your stories and pictures. I love this community! :) more posts to come soon, I'm sure. :) 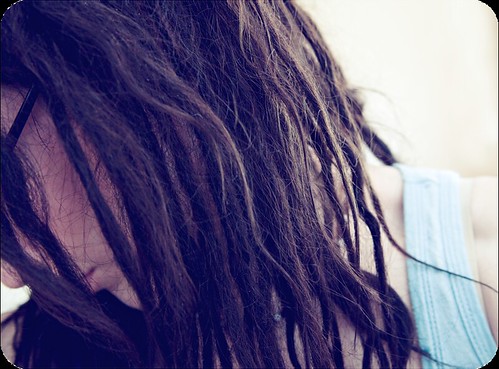 I keep a flickr photo stream and stay pretty active on the group Dreaded Together too.

A few days ago I bought 100% human hair to extend my dreads and compensate for the length I've lost.  I attached it using a crochet hook and dreaded it using the backcomb method.  Because it's completely natural and I bought a hair type that is similar to my own, the small extended area doesn't differ much from my original dreads.  They're babies, so they're a little bit poofy and longer than I had anticipated. I would trim them, but I know that they too will shrink in a few months time.  That said, I'm going to wait and trim them at my one year mark if I still want to.

Oh, I have bangs, but they're pinned back here.  It's been too hot to have them down on my forehead! I've had my dreads almost 2 months... they are natural- no wax! They have shrunk about 1.5 feet too.