So I love browsing the memories, and I do this a lot, but I'm wondering if there is a simple way to tell when new posts have been added to the memories. Am I missing a filter selection? Also, so that I don't get pummeled for an annoying text post:

Had an interview with a job placement company (Office Team) which I thought would last about an hour and a half, but ended up being 2 hours because I had to take skills tests (MSWord, Basic Office Skills, and Typing Speed). None of this was a huge problem except Andrew was in the car waiting on me, and accidentally let the battery run down by listening to the radio/running the fan with the car off. :) He got a jump from someone, and I didn't know anything about it until we were driving away.

The people were very nice and seemed a lot more "together" than the previous job placement company I went to (don't remember the name). If I don't hear from them in a week, I've been told to call. Really hoping this pans out; Office Team specialize in clerical jobs, which is what I'd prefer, at least until I can teach.

When I finished we went to my favorite Chinese buffet and ate sushi and stuffed ourselves with random Chinese buffet things. Oh, and tea. I also most always get ice cream and a pastry (not sure what it's called, but it's twisted and lightly sugared and very flaky and good).

Came home and shucked my clothes, went to the bathroom to do bathroom things and take out my contacts, and saw that my hair (which I'd had pulled back all day for the interview) was just a frantic wad, but also had some volume to it that I liked. So I got Andrew to take some pictures outside, as it was a beautiful evening.

My dreads (according to my ticker) are 2 months 3 weeks and 2 days today so they're still babies.

Have a blessed rest of the week all (Happy "Official Autumn" tomorrow!) -- stay as beautiful as you all are, inside and out.

Edited to add: Andrew calls me "Tentacle Girl" because my dreads aren't "dreads", but... whatever they currently are ;) Main reason I didn't re-backcomb. 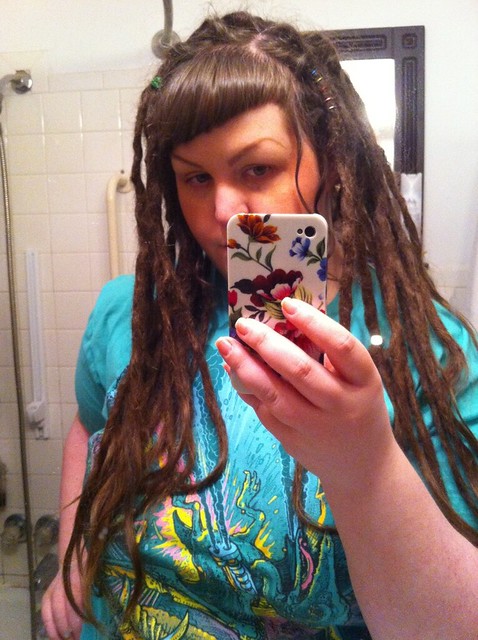 my hair gets really big after i have it up all day. i feel like a lion.