I wanted to post a few pictures of what me and my curly bits have been up to this past month. 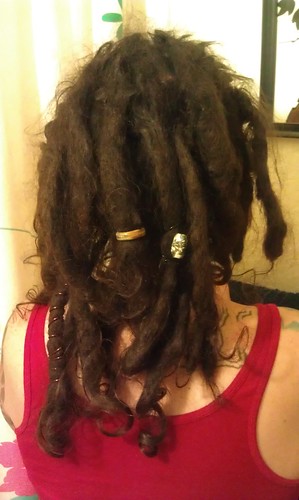 Hiya! My dreads are about 1 1/2 now! Time really does fly. Here are a few recent pictures for you lovelies.

I normally dont do this type of thing, but I think some of you might be interested!
As some of you may have been following over the past few months that I have been participating in the community, i keep running into a lot of problems in my life. From my health to employment and government agencies coming after me.. so I'm trying to do what I can with my limitations to get myself out of the hole, and i know some of you have expressed a wish to help/offered advice. So here i bring to you.

I mentioned awhile ago that I participated in NANO during 09 and won. However Ive been really sitting on my book for a year and a half, not having much motivation to publish it (that compacted with fear that it actually sucks and people will think im a hack). Im now going to put it out there.
I lost the battle against the state of AZ over my unemployment benefits, so they want me to pay it all back, which is around $1400. if you read this (http://helpmisslovely.tumblr.com/post/5588876534/the-purpose) entry it explains in great detail what happened, and the problems im running into with repayment.
On June 1, 2011 I am going to release my book on Amazon. All of the money goes towards paying off this debt. (I did the math and I need 70 people to buy a copy) I am doing live updates on tumblr while i run through the final edits on the book before the 1st. I am also working on getting together a contest, people will submit their name and the time they bought the book and theres four prizes (For the 1st, 20th, 50th, and 70th copy sold) all custom handmade items like a mug, shirt, tote bag, and a mini sculpture!

If you guys have any ideas for other things that might get people interested please comment here or on the blog. I was also thinking of offering custom merch (like the shirt and tote) to be sold with hand signed copies of the book that would be done through paypal instead of amazon.
( Collapse )

Now you dont have to buy the book, even just following me, or retweeting the link, reblogging, posting on facebook or whatever you can to get the word out i would appreciate.

now some dread relevant stuff
during physical therapy the assistant started asking me about my dreads. she asked how long i had them etc. and then she said "im sure that must be a lot of upkeep"
i was confused "what do you mean?"
"well waxing them all the time! i know this girl who does it like everyday and theyre soooo perfect looking"
and then i was like YES my first time to educate someone and explained that her friends dreads arent really knotted but mushed together by wax and how disgusting it is to have candlesticks for hair (the entire room erupted in laughter for that) and i stressed the importance that they have to be clean when my mom just interrupted the conversation to express how much she hates them and how awful i look. I was pretty shocked by how juvenile she was acting (she proceeded to do some other awful stuff later that day but its not dread related.) I understand that she doesnt approve of my dreads, but to try to once again humiliate me in public its getting out of hand. (she did this the night my niece was born too)
does anyone elses family do this? have you found a way to politely get them to stfu?
cause ive tried to talk to her saying that shes embarrassing me and the only response i get is "yea i know"
i think its her way of trying to get me to brush them out if she makes me feel bad enough about my appearance.